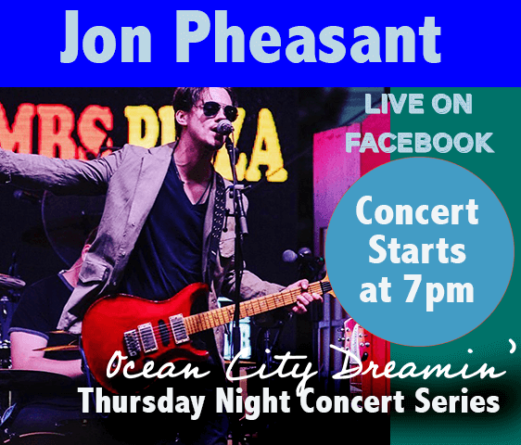 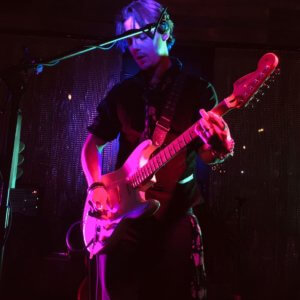 Ocean City Dreaming Thursday night concert series is brought to you by: OceanCity.com, Shore Craft Beer, & Ocean City Development Corporation. We hope this 7pm concert will give you the OCEAN CITY FEELS as you hear the tunes from your favorite artists that perform in Ocean City. Kick back on your couch, and enjoy dinner and music LIVE from your ____________.

While you are watching make sure to say “hi” to the performer and those watching along with you. You could even request a song! Make it an extended family affair and start a Watch Party and invite your friends and family to watch along with you. We all know we need to be social distancing right now, but we still need ways to stay close.

Jon Pheasant has a new album; Supersonic Combustion. He is also a part of the national touring tribute group The British

Invasion Experience. He is based out of Salisbury, MD, and tours up and down the East Coast with his solo project. He performs at all types of venues ranging from Small nightclubs to Sports and Tiki Bars to Nursing and Assisted Living Venues.
Jon has always had a fascination with music and learned to play guitar at an early age performing at youth events for churches. It wasn’t long after that, he discovered the Beatles and immediately fell in love with their music. By 2003 at the age 14, Jon began performing a Beatles Tribute as a street musician in Ocean City, Maryland and soon after that, he began performing at local restaurants, clubs, private events, and other venues around the Mid-Atlantic region.
He was instrumental in forming a Progressive Rock group; Proof of Love; which focused on original material. He then became instrumental in forming The British Invasion Experience, a way to pay tribute to the music that he grew up with and inspired him to pursue music as a career. Jon is also involved with his solo project where he performs originals and covers alike. Jon is heavily involved with not just the performing aspect, but also managing The British Invasion Experience and his Solo Project. Between The British Invasion Experience and his solo career, Jon currently tours all around the East Coast region and is looking to expand further with both projects.