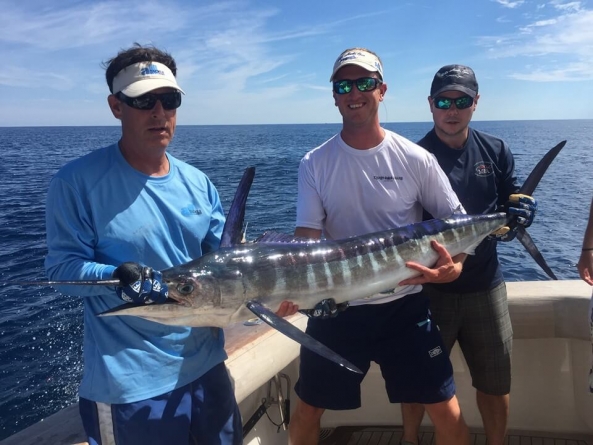 April 20, 2017 — The Maryland Sportsmen’s Foundation today applauded the Town of Ocean City and the Fishermen United of Ocean City coalition for working together to restore and enhance funding for the first White Marlin catch and release of the season. The city recently reversed an earlier decision that would have redirected its customary $5,000 prize contribution, and the Fishermen United coalition of area businesses has pledged to add $5,000 to the annual award.

“Ocean City is not only Maryland’s most popular tourism destination, it is the White Marlin capital of the world, attracting anglers from far and wide,” said Foundation Chairman David Sutherland. “On behalf of all Maryland sportsmen, we want to thank the Mayor, the council members, and the business community for their continued support of this important tradition.”

“Sometimes you take action and it leads to something good,” said Mayor Rick Meehan. “I think we need to not only support this but improve it and really promote it to make it something special.”

“We look forward to working with city officials and representatives of the fishing community to effectively promote and market both this prize as well as Ocean City’s other world-class sport-fishing opportunities,” said Keith Fraser, President of All Tackle and Foundation Board Member. “Every dollar spent promoting these incomparable opportunities has an exponential return on our economy; the White Marlin Open alone has a fiscal impact of more than $15 million a year here in our city.” All Tackle has also added a $500 gift certificate to the first-catch award.

The 44th Annual White Marlin Open – the largest billfish tournament in the world – will take place from August 7-11, 2017, in Ocean City, Maryland. A dispute over whether last year’s proclaimed winner followed tournament rules — along with $2.8 million in prize money – remains in federal court.

The Maryland Sportsmen’s Foundation is a small group of committed hunters, anglers, trappers, and business owners, who work collaboratively to protect and promote these traditional rights, and to safeguard open space and water quality.