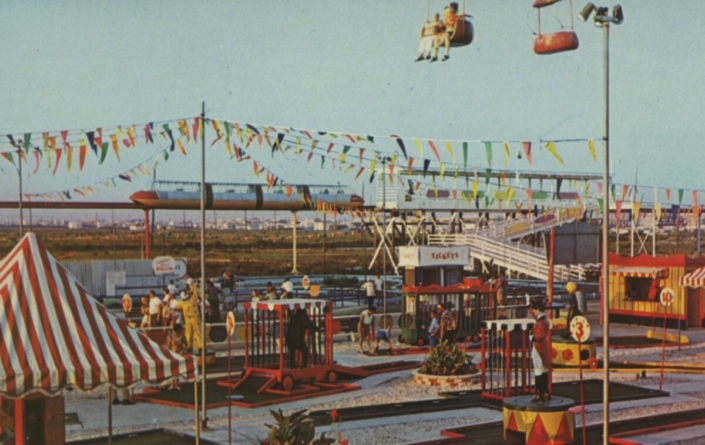 “When I saw the empty lot, I knew I had to write the book.”

Author Earl Shores recalled a moment in 2014 when he was driving down Dorchester Street and saw that the house where he’d spent the majority of his childhood summer vacations had been torn down and reduced to an empty lot. Memories came flooding back: getting up in the morning to go fishing at the docks with his dad, bicycling from the house across the Route 50 bridge to Ocean City.

“It hit me really hard,” Shores said. “Unlike anything I’d ever experienced in my life.”

Seeing the empty lot inspired him to write the book that had been bouncing around in his head since the early 1980s, although he first saw the chapters as scenes from a play rather than what would eventually become a 318-page narrative.

Shores’ “Playland: Greetings from Ocean City, Maryland” is a recollection of the summer of 1980 when he worked at Ocean Playland, a mix of fact and fiction — but heavy on the fact, especially when it comes to the history of the now long-defunct amusement park on 65th Street — and, above all, it’s Shores’ love letter to Ocean City.

A Pennsylvania native, Shores worked at Playland during the park’s last summer of operation. The previous summer he’d had a brief stint at Phillips Crab House (where he hilariously recounts walking out mid-shift on a Saturday night in August with three other employees for an impromptu surf trip — that was the end of that job), but he’d always dreamed of operating rides at an amusement park.

“It was a fantasy that had rattled around inside me since those summer nights when I’d fall asleep in the back cottage of the Ocracoke Apartments on Dorchester Street while listening to the whooshing metallic serenade of the Wild Mouse coaster just blocks away at Trimper’s Rides,” he remembers in chapter two.

Playland, which first opened its gates in 1965, was built to offer uptown visitors a slate of amusements in North Ocean City, which at the time was largely undeveloped and sparse. Some of Playland’s attractions included a monorail that weaved through the entire park, a wooden roller coaster called the Hurricane, mini golf, and over 25 other attractions geared toward park-goers of every age. Playland’s Ghost Ship, a dark ride, was designed by Bill Tracy, the genius behind Ocean City’s iconic Haunted House ride that remains on the Boardwalk to this day; some of the props in Ghost Ship were later purchased by Granville Trimper and added to the Haunted House, where they can still be seen today.

In 1965, construction was completed on Ocean Playland Amusement Park on 65th street bayside, on a large peninsula-type lot that protruded out into the bay at a price tag of over $2 million. The park was only 860 feet long and 375 feet wide and sat behind a 1000-car parking lot off of Coastal Highway.

Unbeknown to Shores and most other Playland employees at the time, the park would close permanently in 1980. There had been no hint that the park wouldn’t reopen as usual for the summer of ‘81 — employees were still getting paid and routine maintenance was still being done on the rides by the end of the summer — but Shores cites the high land value and competition from nearby amusement parks as possible reasons for Playland’s closing.

“Jolly Roger was starting to go the Go Kart route,” he said. “They’d just opened the Malibu Grand Prix setup, and that was part of the Go Kart competition that Jolly Roger and Playland were having at the time. They took a different path and went with a waterpark, and Trimper’s has a long tradition… it’s amazing that it’s still there and it goes back such a long way.”

Shores spent about two years writing the book and countless hours researching the park, parsing information from local history books like “Trimper’s Rides” by Brandon Seidl and Monica Thrash and “Vanishing Ocean City” by Bunk Mann, along with his own collection of vintage postcards.

He also had help from the National Amusement Park History Association, which verified that the park did, in fact, close in 1980, and also provided some obscure and surprising facts about Playland.

Shores learned, for example, that when the park first opened in the ‘60s, rides were “booked in” for the summer, meaning they were owned by individuals who would get paid at the end of each week based on how many tickets were collected from their ride.

“That was a novel concept,” Shores said. “Supposedly the amusement park industry was watching to see if this could work, and it didn’t. By 1970 or so the park had taken over the rides.”

“Playland: Greetings from Ocean City, Maryland” isn’t just a memoir of Shores’ summer working at the amusement park. It’s also a collection of Ocean City stories and anecdotes from days gone by, a time capsule from a time in Ocean City’s history that, to Shores, no longer really exists. Younger readers can relate to the passages about biking up the Boardwalk or marveling at the antique rides at Trimper’s, but other parts are more exclusive to Ocean City visitors of the mid-20th century.

“It’s a love letter to my family and the experiences we had in that formative time when Ocean City still was small town-ish in that we knew the people on the Boardwalk,” he said.

Everywhere he and his family went, Shores said, the owners would come and talk to them like they were an extension of the same family. The owner of the Alaska Stand on the Boardwalk would wipe off his apron and give Shores the “banana report,” letting him know whether the chocolate bananas were ready or not.

“Playland: Greetings from Ocean City, Maryland” can be found at the Life-Saving Station Museum gift shop, at Trimper’s Inlet Village store Down Memory Lane, at Bethany Books in Bethany Beach, DE, and online. More information is available on the book’s Facebook page.