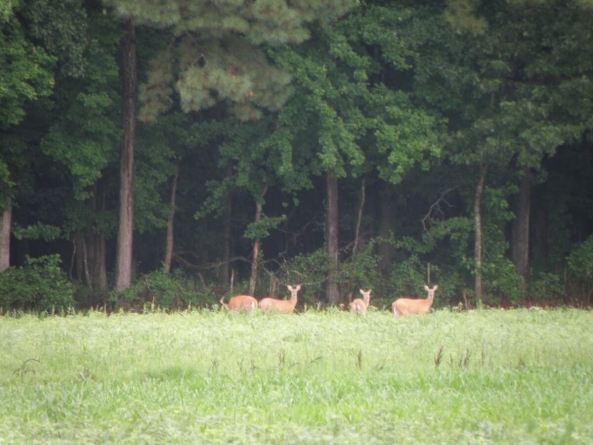 Growing up on the Eastern Shore (in the Berlin/Bishopville area), I have witnessed a number of changes to our county over the years.  One of the most beautiful and surprising changes is the number of deer that can be seen every morning or late afternoon in fields across the Shore.

Thirty years ago, deer hunters, in their orange vests and camouflage garb, were also a familiar sight on the side of the road. Hunters were always arriving to hunt at daybreak, leaving in the late morning, or parked on the side of the road late afternoons until dusk. Many times these hunters left empty handed, as deer were not as plentiful back then.

However, while deer sightings are now more frequent, the sight of a deer hunter is scarce. As the number of hunters decreased over the years, the number of deer has increased dramatically.

The cost of too many deer

A sight of these beautiful creatures is always exciting to catch. That being said, in recent years, the number of deer, and lack of hunters, has caused an amazing amount of loss to farmers due to crop damage.

One Bishopville farmer was forced to replant his fields multiple times due to the herds of 10-25 deer that gather to forage on the tender crops.  This loss not only affects the farmers, but the cost of producing the food, therefore increasing the overall cost of the product.

According to the Maryland Department of Natural Resources, deer cause $7-8 million dollars in crop damage each year, which is not uncommon in many states.

Although this may be more or less common in other areas, Worcester County farmers in particular have stated they have definitely been made acutely aware of the decreasing number of hunters in our area by the equally increasing deer population overwhelming their land.

Where are the hunters?

We are left to wonder why there aren’t as many hunters as there once was. Generations ago, fathers passed on the art of hunting and outdoor sports skills to their sons and daughters. There now seems to be fewer interested in hunting since the late 20th century.

Historically, the number of hunters has helped level the playing field for farmers, as the DNR uses hunting licenses as a management tool for deer populations.

However, in 2009, the Capital News Service reported that the number of hunting licenses steadily decreased in recent decades, stating:

“It’s a downward trend over the last 20 years,” said Bob Beyer, then deputy director of the Maryland Department of Natural Resources Wildlife and Heritage Division, “which gets almost 70 percent of its budget from hunting license sales”.

The statement continues: “The state sold 195,000 hunting licenses in 1975, but in 1998 the number dropped to 135,000. Estimated revenues from license sales fell about 16 percent from 1988 to 1999, Beyer said, meaning less money for program management and wildlife research and fewer employees doing fieldwork.”

These statistics indicate a loss of interest in hunting. Farmers are not limited to a specific time of year (or a certain season) to hunt deer on their own land. The farmers are therefore allowed to attempt to control the local deer population. Regardless, the chore of exterminating so many deer is daunting to say the least.

However, Mr. Brian Eyler, Deer Project Leader, Wildlife & Heritage Service of the Department of Natural Resources, reported on August 2, 2018: “The big drop in license sales was associated with the loss of small game hunters when pheasant and quail numbers dwindled.”  Mr. Eyler further states since that time the “hunting license sales have been steady.”

Because of the lack of hunters in our region, while the number of licenses have been steady since 2009,  the deer population has increased.

Lend a hand to your local farmer

This is a perfect example of an outside influence that can cause monetary loss to your property and/or income. Overpopulation of deer can cause hardship, not only to the farmer but ultimately to the economy as well.

For any hunters still out there, you may want to ask local farmers if you could help with their four-legged invaders. It would:

Although there are many different scenarios of outside sources wishing to encroach on our property, herds of deer seem to be some of the most damaging and elusive for farmers.