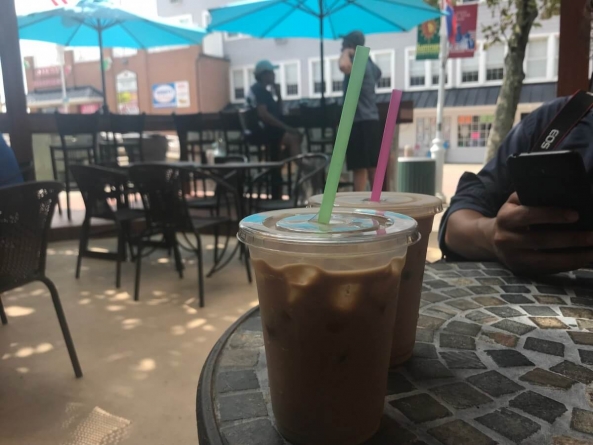 I’m a coffee addict, and I like to drink local. Whenever I have friends in town, many of them fellow coffee addicts, I make some recommendations based on which coffee shops I know to be good and which, in most cases, you won’t find anywhere else. While Boardwalk Birdie has already written the definitive list of the best coffee shops in the coastal Maryland region, Ocean City alone has a handful of small businesses that can whip up an excellent cup of java. Here are five of my favorites, and a bonus number six if you’re a creature of comfort and familiarity. Let me know what you think and if anyone major is missing from this list!

The first time I stopped by The Muze Café was just to get an iced coffee before rushing to an appointment in Ocean City, but I was really tempted to stay for an entire meal (and I absolutely would have, had time allowed). First of all, their outdoor patio just off the Boardwalk on Somerset Street is super charming, and provides a quaint downtown café atmosphere like nowhere else in Ocean City (sitting out on their patio almost feels, dare I say, European). Secondly, there aren’t many places where you’ll find savory crepes in OC, so The Muze is there to sate your crepe cravings. The Nutella crepe is a favorite among many. It’s a really nice place to rest your tired feet after a long walk on the Boardwalk, enjoy a quick bite and some caffeine, and, you know… Just muze.

2nd Street on the Boardwalk

Since the Boardwalk is the best place in Ocean City for an early-morning stroll, it’s no wonder that there are two excellent coffee shops that make the morning just a little more convenient for joggers, bicyclists and sunrise-chasers. Even if you’ve never gone in for a latte at A Latte Enjoy, you’d probably recognize the shop from the black octopus sign that sits out front. It’s worth stopping by the stand for a quick caffeine fix, as long as you have cash on hand, as the business is cash-only. While The Muze makes for a good place to rest after a busy day on the Boards, A Latte Enjoy is your Second Street-stop for coffee when the day is just getting started and you’re still waking up. And for the rare few who don’t like coffee, their smoothies are pretty delicious, too.

In the past few years, Rise Up has really taken Delmarva by storm… And for good reason. A new location just recently opened in Cambridge, Md, making for a good pit stop when you’re traveling to Ocean City east on Route 50, and the West Ocean City location has been around for a few years now — I frequent them often. Too often. They serve an array of breakfast-type foods by their “food alter-ego” Mad Eggs, and I often find myself coming in for a Rise Up burrito even when there’s like, negative money in my bank account. They also serve organic kombucha from Real Raw Organics and specialty drinks like slow pour, draft cold brew and nitro coffee, keeping crunchy Eastern Shore folks like me forever satisfied.

Satellite Coffee Shop (sometimes known as the Satellite Café ) is the place to go for breakfast all-day (or at least until 2 p.m., when they close. iHop already has an unfortunate hold on the breakfast-for-dinner market). Just take a look at their unofficial Facebook page and scroll through the tons of photos that diners have posted of their Satellite breakfasts… Facebook is usually a cesspool of unhappy customers, especially when it comes to unofficial pages that customers make, but most of these posters seem pretty happy, with comments like “And of course, another favorite, classic eggs over and scrapple. Life is good. Lol. ?” and “Enjoying my regular favorite place for breakfast in Ocean City. And always the best cup of coffee, especially in the morning (they use a secret brand and brew in a huge urn). Sooo good. ??” Only the sunglasses emoji guy knows the secrets of Satellite Café coffee, and his pixelated lips are sealed.

If you’ve taken a walk through the Gold Coast Mall recently, you’ve probably noticed Caffè Café next to OC Kabob. Caffè Café is actually owned and managed by the same family that owns OC Kabob, and they’ve proven  to specialize in a lot of different foods and beverages. Caffè Café is cool because they’ve got a lot more than just coffee, like smoothies and sandwiches and even tiramisu, and they’ve also got a bunch of unique flavor options like raspberry, banana and toasted almond mocha.

No, it’s definitely not a local option, but it appears that sometimes vacationers just want what’s familiar when it comes to their morning cup of joe (or their mid-afternoon venti caramel frappuccino). And now that there’s one on 123rd street new this summer, you won’t even have to drive the extra 15 minutes from North Ocean City to the location on 16th Street, or even further to the Starbs’ in West OC. The 16th Street Starbucks is owned by the Harrison Hotel Group, so you can’t use your rewards points, but you can crab a quick iced coffee before heading to the beach, mere steps away.