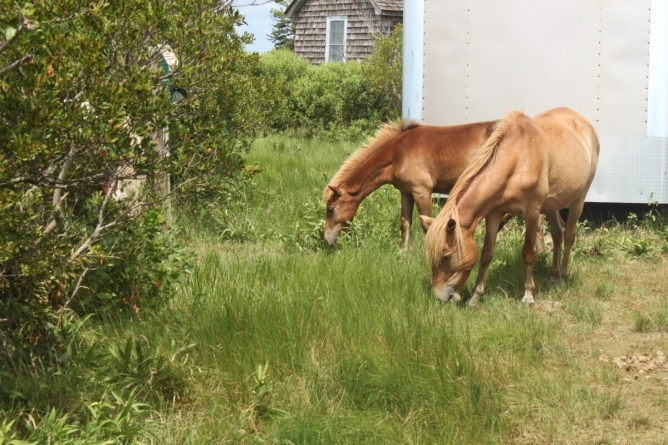 I may have only moved to the Shore a few months ago, but I don’t think the beauty of the Assateague horses will ever get old to me. I’ve been to the island a few times before, but spotting a horse on the beach or right outside your car window is still kind of like seeing Bigfoot (but more majestic?). It’s like when I went to the Smoky Mountains in May. We were driving up, up, up the mountain when we started to see tens of cars stopped and parked alongside the road. We got out of the car to find out what had everyone crowding around the edge of the woods, and saw three black bear cubs just a short distance away.

Seeing one or several of the island horses provides the same kind of excitement and awe (it’s just a bit less rare and a lot less dangerous than seeing a bear cub), no matter how many times you’ve seen them. That’s why it’s so cool that the Assateague Island Alliance just launched a Horse ID app that’ll allow you to identify who it is exactly you’re marveling at. Here are a few screenshots I took from my own horse ID’ing adventure that’ll show you how it works.

You can also view horses that other people have identified under the “Recently ID’d” page.

How lucky you are with the app and horse sightings in general just depends on the day you visit. I went on an overcast Saturday and only saw one horse during the several hours I was there (one woman I met on a trail asked desperately, “have you seen any ponies today?”). When I tried to ID it the one pony I saw, I found that I didn’t have good enough reception where I was standing, so I soon gave up, and I don’t think my picture is clear enough to try to ID it from home.

But, if your pictures are good enough, you can wait until your phone has better reception and try to identify a horse later on. That’s what I did when I went on Tuesday and got up close and personal with three horses that were hanging around a parking lot. Here are a few non-cellphone photos from my pony ID adventure on Tuesday. Good luck to you on your own expeditions, and don’t give up!