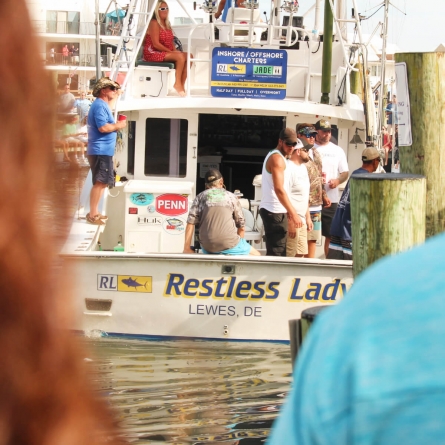 Get your rods, reels and tackles ready — The White Marlin Open returns for its 45th year August 6 – 10, with purse money expected to exceed $5 million. The white marlin has all but been crowned the official fish of Ocean City, and every year the billfish and its annual tournament draws thousands of anglers and onlookers to the water and the weigh-ins at Harbour Island on 14th Street and the Bay.

The tournament has been on an upwards trajectory since its start in the 1970s, and if it remains on course, the 2018 WMO and the white marlin themselves will be bigger and better than ever. Records were meant to be broken, and that very sentiment is what draws so many fishermen and spectators to the mid-Atlantic every August. It’s…

The largest billfish tournament in the world.

Not only is the White Marlin Open the largest billfish tournament in the world, it’s also held in the “White Marlin Capital of the World.” It was President Franklin Roosevelt who first awarded Ocean City that title after a prosperous day spent fishing at the Inlet in 1939, and the town has more than lived up to its designation in the decades since.

The tournament was already a decent size in its first year, with 57 boats and 150 anglers competing for 20 grand, but since the 70s the White Marlin Open has absolutely exploded. In 2017 there were 358 registered boats and over 3,000 anglers. In 2018, it’s expected that the total payout will exceed $5 million. And still, the tournament’s founder Jim Motsko remembers a time when the White Marlin Open was only a dream.

I was on my honeymoon and I told my wife, wouldn’t it be nice to earn a living doing the job you really love to do? And to make a living out of it?

“At that time, golf had been paying prize money for people to compete in golf tournaments,” Motsko said. “Tennis just started offering prize money. I thought, wouldn’t it be neat to be a pro angler? To just put up a flat entry fee, and whoever catches whatever the most, they could win some money.”

Motsko worked his way through school at the University of Maryland by working on charter boats in Ocean City every summer. That’s where he learned how to reel in a white marlin, and eventually the White Marlin Open materialized. He himself fished in the first 34 tournaments — “I wanted to win the money so I could take it and go fishing with it, because it’s not a cheap sport or hobby,” he said — but nowadays he does most of his fishing after the tournament is over.

There are no age restrictions when it comes to competing in the White Marlin Open. Whether the angler is seasoned or novice, Motsko said, isn’t of much importance, although someone who’s able to catch more white marlin in general will obviously have a bigger chance catching a larger fish. But still: 2017’s top winner took home $1.6 million for his first-ever white marlin catch. Teenagers have taken home top prizes in the tournaments. Like its name says, the WMO is truly open, and full of possibilities, for any angler — regardless of age or skill level.

“We have altered the rules so anybody can hook the fish and once it’s on the line, they can give the line to someone else,” Motsko said. “That lets novices or people who aren’t adept be part of it, instead of just thinking, ‘we can’t compete.'”

Here are a few of the WMO founder’s white marlin fishing tips.