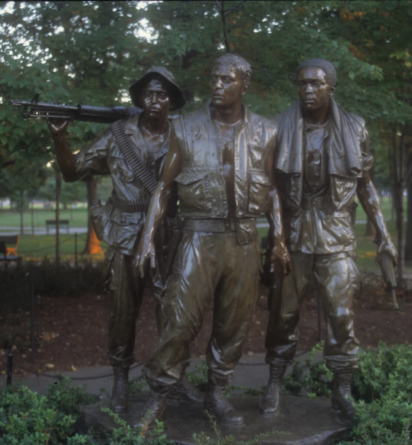 From the Pen of the Captian’s Kid: Vietnam

“You got me through Vietnam,” the former lifeguard remarked soberly as he looked over at his former beach patrol mentor, and I witnessed one of the most memorable and powerful tributes to my father, Captain Robert S. Craig, that I had ever heard.  It was a statement both pithy and awesome stated by a Vietnam veteran at a lifeguard reunion some two decades ago.   Past members of the Ocean City Beach Patrol (OCBP) from the 1940s through 1960s were gathered together at the Beach Plaza Hotel on a fall weekend many decades after what many described as the best years of their lives serving on the beach patrol.  They returned to town in order to socialize with old friends, to reminisce about a romantic evening at a lifeguard dance or call to mind memorable surf rescues from years gone by, and to indulge in a bit of nostalgia. Most of all, they had returned to Ocean City to meet up with their former captain once again.

After the organized reunion banquet, it was proposed that the lifeguards reconvene informally in one of the hotel’s meeting rooms and share stories of summers past.  It was expected that the late-night gathering would be a venue for recollections of memorable deeds and congenial one-upmanship, in which a remembered thirty-minute, four-man rescue in six-foot waves would be trumped by a forty-five minute, nine-man rescue in ten-foot waves.  It turned out not to be that at all.  One by one, each man rose to his feet and spoke of the leadership of, and mentoring by, Captain Craig.  They acknowledged the captain’s importance in their lives as they matured as young men, and they spoke of responsibility, of accountability for one’s actions, and of character building.

And then the military veteran stood up, looked over to Captain Craig, and said, “You got me through Vietnam.”  The immediate silence was tangible. The private conversations in the back of the room suddenly hushed, and everyone present looked over at the Vietnam veteran and ex-lifeguard.  And then, with eyes already tearing up, they turned to see that Captain Craig, too, was dabbing his eyes.   “I would not have come home,” the Vietnam vet remarked, “except for what you taught me.”

The word awesome is today overworked and misused.  When I place a restaurant order for a hamburger and fries, and the Gen-Z waitress says, “awesome,” I suspect my meal will arrive somewhat short of inspiring awe.  But that moment with the Vietnam veteran paying tribute to my dad at the lifeguard reunion—that was truly awesome.

“When I first came to Ocean City to work on the beach,” the vet told the gathered OCBP alumni, “I was young and immature, but the lessons I learned, and the values and the commitment to personal accountability that I developed by taking on this job on the beach patrol, and under the captain’s guidance, stood me in good stead in the military.  On the beach patrol, I was still a teenager, and I had to learn that this job called for more than just sunbathing on a perch while watching girls in bikinis walk by.”  The vet then turned back to Captain Craig: “’I was responsible for people’s lives,’ you told me.  And if I were tempted to be just a few minutes late to work, I remember your words to this day:  ‘How would you feel if a child drowned in the ocean in front of your empty lifeguard stand,  at ten minutes after ten in the morning, because you were late for work?’  Ten sharp, all lifeguards are on duty, and ‘there is never an excuse good enough,’ you said, ‘if you lose a child in your ocean.’

“And then I was sent to Vietnam.”  And because the veteran suspected that some people even among lifeguard alumni present still might not make the direct connection,  he began to cite examples:   “As members of the beach patrol, we all learned ‘the 180-degree scan’:  keep your back always to the boardwalk and your eyes on the water; look to confirm where the lifeguard to your left is, scan half his water and all of yours, and then swing your view a full half circle to the guard at your right, using peripheral vision at both start and end of the 180-degree scan.  I learned to become acutely aware of my surroundings—to watch in front of me and peripherally; it was my job on the beach, and so it was in the jungle.  As a high school coach, Captain Craig, you taught your basketball players about peripheral vision so that they would never telescope their pass of the ball to another teammate.  Look left as you move right.  Be aware.  Stay alert. These were watchwords for sports, for the beach, and for my platoon in ‘Nam.  I learned to ‘watch the back’ of adjacent lifeguards, and to know that they always had my back.   I learned to be a team player while never compromising my own duties on the team.  I learned to respect authority.  I learned to be accountable for my own actions.” And then the vet paused briefly,  looked back at the captain, and pronounced these words distinctly so that all would hear every word:  “Captain Craig, my parents said that they sent you a boy, and you returned to them a man.  Well, that man was later sent to war in Vietnam, and I came home.  Thank you.”

Robert M. Craig is an historian who taught for 40 years at the architecture school at Georgia Tech.  He resides in Atlanta but considers Ocean City his summer home.  He served on the Ocean City Beach Patrol from 1960-65, and between 2010 and 2015 he and his wife Carole restored Bay Breeze cottage (now on the National Register of Historic Places).  The house was built circa 1950 by Craig’s father, Captain Robert S. Craig of the Beach Patrol, and for many years Bay Breeze provided summer housing for the family and various members of the lifeguard organization.  The younger Craig is a Vietnam veteran (U. S. Navy), received a Ph.D. from Cornell University in 1973, and has published nine books (mostly architectural history); he will bring a wide range of interests to this new series of feature articles about Ocean City “From the Pen of the Captain’s Kid.” To purchase books by Robert Craig go to his From the Pen of the Captain’s Kid page with links to purchase. Robert M. Craig is a contributor to OceanCity.com. Any opinions and views of  Mr. Craig belong solely to Mr. Craig. Mr. Craig’s opinions to do not represent OceanCity.com.