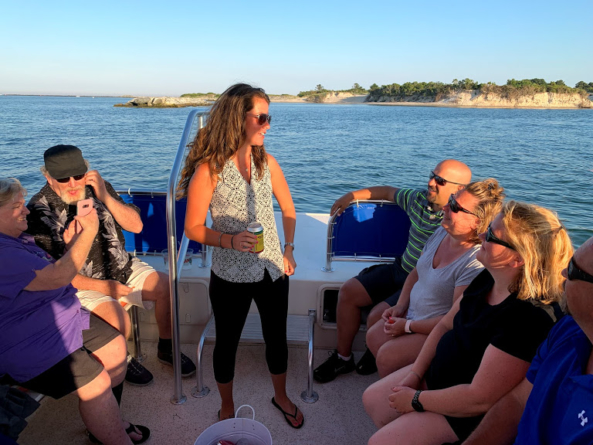 Shore Craft Beer and the OC Bay Hopper, in collaboration with craft breweries across Delmarva, teamed up to offer Craft Beer Cruises again this summer: An opportunity for people to enjoy fantastic views from the water on  Thursday evenings while drinking, and learning all about, local craft beer.   Social distancing is accomplished by selling three zones in the boat.  Aft, port and starboard sections.  You and your family or friends can buy a section and have as many as four in your group.  The total number of passengers allowed is 9.

Through October, the OC Bay Hopper will embark from the dock at Hopper’s in West Ocean City and put the Shore’s World Class Beer and World Class Beauty on full display, sailing two hours to Assateague Island and back.   There will be one bathroom break mid-way.

Some cruises provide a wide variety of Shore beers which will give you a great survey of many breweries here on the Shore.  Other cruises feature “Tap Takeovers,” where a representative from one brewery hosts the cruise to tell guests about their brewery and their beer.  Tall Tales Brewing from Parsonsburg, 3rd Wave and Big Oyster have controlled the “tap” on craft beer cruises last year and are joining the line-up again this year.  Crooked Hammock will join the cruises for the first time this year as they have gotten a license to distribute in Maryland.   Ann Hillyer founder of Shore Craft Beer will host the survey cruises and provide many different craft beers from which to choose .

A ticket aboard the Bay Hopper’s Shore Craft Beer Cruise includes two complimentary beers of the ticketholder’s choosing, and additional beers are available for purchase thereafter.

Cruise participants can grab dinner and drinks at Sneaky Pete’s  before or after their cruise.   Sneaky Pete’s is behind Hooper’s Crab House on the water next to the Route 50 bridge.  It is a wonderful place to enjoy the Bay before and after the cruises.  Their kitchen is open for food and their bar for drinks and beer.  They are home to Fin City Brewing and know good craft beer.  You can also order take-out and get it as you board the boat for your Shore Craft Beer Cruise.

Craft Beer Cruises depart at 7 p.m.  on Thursday evenings; cruises are selling out fast, so it’s recommended that guests purchase their tickets in advance.