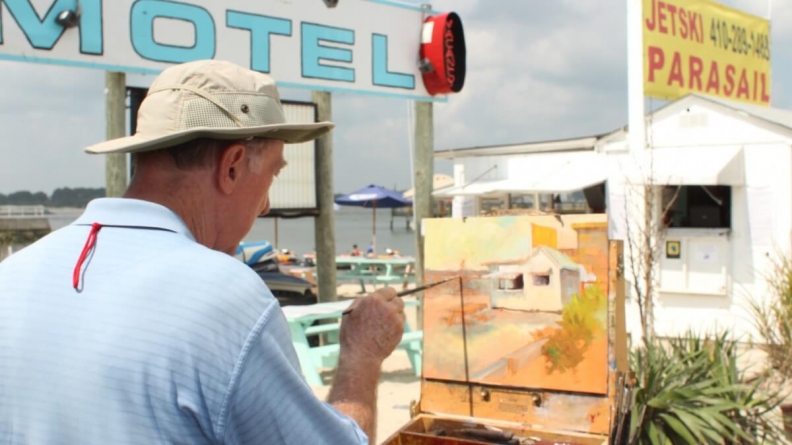 En plein air means, simply, outdoors. Plein air painting is the act of painting outside. Ocean City, with its dunes and marshes and myriad other natural wonders, is a plein air destination. Every summer, 50 artists who hail from all across Maryland and beyond spend a week capturing Ocean City on their canvases with oil, watercolor and chalk pastels.

The Art League of Ocean City hosts the event, and after three days (and one Saturday morning) of painting, the artists return to the Art League with their finished works where paintings are juried and prizes are awarded. The week culminates with a Quick Draw competition on Sunday morning in downtown Ocean City, followed by a Wet Paint Sale where the general public can purchase the very work they just saw in the process of creation. The unsold paintings will then be on display in the Galleria of the Ocean City Center for the Arts from Aug. 12 – Sept. 4.

There’s nothing more magical than taking an early-morning sunrise walk, or sitting out at the docks watching fishermen sail in with the day’s catches, while an artist works beside you to recreate the entire scene on their canvas and depict a small but dazzling slice of life in Ocean City.

BL was working on a documentary about the annual plein air event, so I followed him around while he followed the artists around, and together we documented the painters in their most natural habitats. I also decided to work “learn to paint” and “become a plein air artist” into my 50-year plan for life (I’m a little busy now, so it might have to wait until I retire in 40 or so years). The photos and screenshots below are mostly by BL. They were taken on Wednesday, Aug. 8, the first day of the plein air event.

I’ve been doing plein air for 10 years. I’m a nurse, that’s what I do for a living. But now I’m retired. You’ll get there someday, don’t worry.

I had my favorite little secret spot… It’s down on the backside of Jolly Roger. You can see the Ferris Wheel. And there’s a tiny little beautiful marsh there, and I painted it every single year.

But today I’ve been running people off — they want to park in that spot right there and I go, ‘no!’ But they’ve been really sweet. I just run over there and say, ‘could you please move your car?’ And everybody does, no problem.

What do you enjoy about doing plein air in Ocean City? There’s such variety. The people are great, for one thing. And there’s a lot of life here, a lot of activity. A lot of beautiful places. You’ve got the marshes, you’ve got the ocean, you’ve got everything, everything’s here that you could possibly want to paint outside. No mountains, but hey. You can’t have everything.

This is my fourth year here. And I say that they don’t like me because the first two years I won first place, and last year I won second place. So people don’t like me to come!

The first year I went over to Chincoteague or Assateague and painted, and then two years ago I stayed over in West Ocean City, so I painted those docks over there where that big fishing regatta is in West Ocean City, but it’s too crowded over there today. And I painted, I think it’s called Stinky Beach, but they just had a big incident there yesterday, so I went over there yesterday, and you couldn’t even get close to that beach.

If I quit, I’m 75, so it’s kind of hard for me to stand up all day and paint. The thing I’m going to miss isn’t so much the painting, I can paint in my studio, but it’s being out with the other artists.

I’ll paint a quick one here, then I’ll go over to the Frog Bar and get lunch and a beer… If it’s sunny I’m good, if it storms I’m good, but if it’s lightning I’m fried.

I live in Newcastle, Delaware, where I have an art gallery right in the tourist section. I have a gallery right smack in the middle of town. Actually it’s called my Man Cave, ’cause I go there and I paint a lot and I put things up on the wall. People come in and look and if they critique, that’s okay, but if they criticize, they’re out!

The people at the Art League are so friendly, that’s how I got in in the first place, years ago. They got me in and I’ve been happy to come back year after year and enjoy the Life Saving Station, and that place with the flags — the Kite Loft — and you’ve got Thrashers french fries and soft shell crabs and Higgins crabs. So I’m just all about the crabs, you can ask Rina about that and she’ll tell you.

I’ve been painting off and on my entire life. I was a firefighter for 26 years, so that was a big distraction.

Where’s your favorite place to paint here? The shade, right now. You can take a beating out there. I’m waiting until sunset… The big problem with plein air is how quickly the light changes. It can change your painting. It doesn’t give you a whole lot of time — but that’s also the benefit of plein air painting. Trying to capture the light before it disappears, the whole painting can change so quickly.

How long plein air, hmmm… Maybe 10 years? And I really didn’t start painting seriously until about 15 years ago. 16, 17 — the years add up. I’m from the Pittsburgh area, so I’ve done other ones in Pittsburgh.

What do you do when you’re not painting? I read about painting.