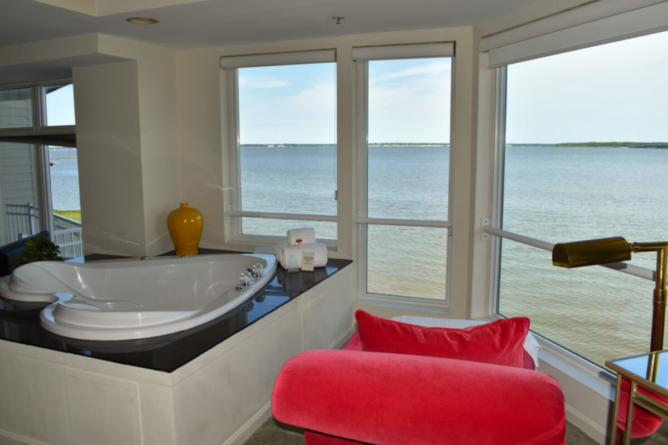 Like its next-door neighbor the Lighthouse Club, The Edge is a designer hotel and part of the sweeping bayside resort known as Fager’s Island. Unlike the Lighthouse Club, however, or any other hotel in Ocean City, each of the 12 suites in The Edge is decorated according to a different theme. The Left Bank, Riviera, Bliss, Safari, Contemporary, Monkey Island, Michelle, Bali, No. 9, Orient Express, South Beach Penthouse and Hang Five Penthouse each come with their own distinct personality and flavor — not to mention bay-facing Jacuzzi tubs, luxurious marble bathrooms and unique furniture and decor from around the world.

Ocean Cityâ€™s bayside has steadily become a more popular hub for vacationers over the decades; not only to the boaters, who already know from experience all the delights of the Assawoman and Isle of Wight bays, but now for the families, couples and friends who have discovered that nothing beats a sunset over the peninsula, too.

Take a peek at some of the suites in The Edge and decide for yourself which one would lend itself to your perfect couples’ getaway — or just roll the dice and pick any suite at random, because they’re all comfortable, beautiful and equipped with gorgeous views of the Isle of Wight Bay. It’s hard to go wrong.

But if you particularly love monkeys, you should probably stay a night in Monkey Island.

The Edge is located on 56th Street next to the Lighthouse Club Hotel on the Isle of Wight Bay. Each of its twelve suites are individually and beautifully designed and furnished, reflecting sophistication with the simplicity of the beach. This small boutique designer hotel is positioned at the waters edge on the Isle of Wight Bay and offers an...