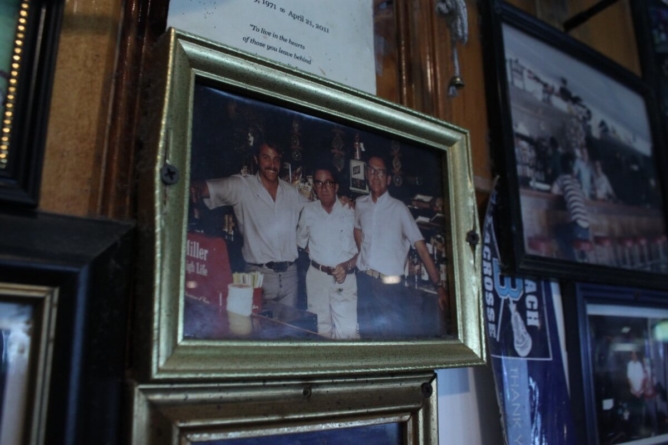 We published our “Top 10 Year-Round Bars in Ocean City” based on Best of Ocean City voting, the comments we’ve received from the people (mostly on our Facebook and Instagram), and our personal top picks, as locals on the Shore who often crave a craft beer after work.

Based on the comments we received after the list was published, it seems that some additional mentions are in order. There’s one downtown dive in particular that can’t be ignored, that serves as Boardwalk-goers go-to in the summer and the locals’ favorite all year round:

“I don’t know why it’s called The Cork Bar,” owner Billy Wilkins said. “I’ve asked everybody and I get three different answers.”

The Cork Bar has been in the Wilkins family for over 50 years, and is currently owned and operated by Billy, his sister Wendy DiBuo, and their parents Martha and Gordon Wilkins.

The bar was purchased by Gordon’s father, Maurice Wilkins, and his partner John Matzcho in 1963. They leased the building from Dolle’s, which they still do to this day, and as Wilkins noted, it was already called The Cork Bar when his grandfather purchased it.

“I started working here in 1979 with my grandfather when I was 11 years old,” Wilkins said. “I was chairs up, stools up, sweep and mop. And anything else he told me to do.”

When Wilkins worked there in the 70s, the bar’s entrance was still a garage door. In 1992, glass doors replaced the garage, and in that year, The Cork Bar became a year-round rather than seasonal business.

Dolle’s tore down the entire building in 2007 and rebuilt it, adding a kitchen for the customers who’d previously had to pop outside for a snack. The new, updated bar opened in the spring of 2008.

Even in the new building, old traditions preserved… Like customers signing their dollar bills and taping them to the ceiling. There are hundreds, if not thousands, of dollar bills stuck to the ceiling of The Cork Bar on any given day.

The tradition started over a decade ago by one regular after he’d had a few drinks, and it quickly caught on.

“Other people started doing it, ‘til every time we put a dollar up, five would fall down,” Wilkins said. “We didn’t really know what to do about it, so we decided when they fell down we would just put them in a can, and donate the dollar bills to this charity, the Autistic Children’s Support Group of Worcester County.”

The support group was started by Wilkins’ sister, Wendy, who raised her own child with autism. Wilkins said that the bar has been able to donate over $80,000 to the charity after 12 years just from the falling dollar bills.

Another reigning tradition of The Cork Bar is the firefighter memorabilia that decorates the walls. That tradition started when Wilkins’ friend, a Baltimore City firefighter, brought in a friend’s helmet to hang on the wall as a joke. Like the dollar bills on the ceiling, hanging old helmets on the walls quickly grew popular.

“We hung one helmet up, and people started bringing us helmets they wanted to hang up, too,” Wilkins said.

That tradition is also sentimental to the family: Both Maurice and Gordon Wilkins had volunteered at the Ocean City Volunteer Fire Company for 50 years.

Over the years, The Cork Bar has attracted firefighters and civilians alike, not to mention a crowd of loyal regulars and tourists who become regulars when they visit Ocean City every summer.

When asked how the Cork Bar attracts a variety of customers all year long, Wilkins said that it’s all about customer service.

“We try to treat everybody right,” he said. “And our beer is very cold.”