Surf’s up! A note on surf beaches in Ocean City

We have large beach crowds from Memorial Day to Labor Day in Ocean City. To keep everyone safe, surfing is only permitted in designated areas during the beach patrol’s operating hours of 10 a.m. to 5:30 p.m. Seven days a week there are two rotating surf beaches in Ocean City. And, on weekdays, there is also a third surfing beach set up in the inlet area. No activity other than surfing is allowed in the surf beach area.

The two rotating surf beaches move two blocks south each day. Some beach visitors are bothered or upset when they come out to the beach and realize that the surfing beach is on “their” beach for the day. However, we try to explain that when you do the math it really isn’t that bad. Based on the current rotation, a specific street block would not have the surfing beach on the same date for over 20 years. So if your family stays on 94th Street the second week in July every year, and the surfing beach were to be on 94th street this year during that week, it would not happen again for the next 20 years. So giving up your beach to the surfers once every 20 years isn’t so bad. 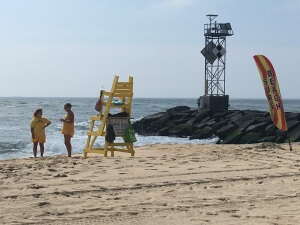 The third surfing beach operates Monday through Friday and is always in the same location starting at the south rock jetty at the end of Ocean City and extending 200 yards north. This area was picked because it is usually not crowded on weekdays and often has surfable waves. Furthermore, it is not safe to swim close an obstruction such as the rock jetty.

On certain days when inclement weather affects Ocean City, the Beach Patrol Captain may allow surfing. This decision is made daily with the input of supervisors on the beach. If there are low numbers of people on the beach, and the weather is poor and not predicted to improve, the surfing ordinance may be suspended for a period of time, which locally is knownas “modified.” There are also other factors taken into consideration when making this decision. On days of inclement weather, you can ask any SRT on the beach if the surfing ordinance has been suspended, or call beach patrol headquarters at 410-289-7556. But the absolute best method to stay informed is to subscribe to “SURFING NOTIFICATIONS” on the Beach patrols website www.ococean.com/ocbp.

Local surf shops will also know when the surfing ordinance has been modified. Even during these conditions swimmers always have the right of way and surfers must be at least 50 yards away from any swimmers and wear a leash at all times (Ocean City ordinance). Even during the suspension of the ordinance, we will maintain the surfing beaches that were scheduled for that day so that the surfing community will still have an exclusive area to surf.

Look for the surf beach markings 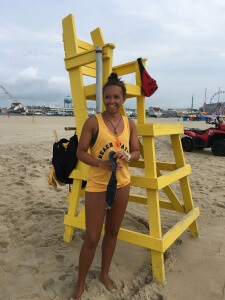 Surf beach areas are marked by smaller yellow stands on the particular block designated for that day, one at the north end of the block and the other at the south end. You can identify a surf beach by the large “SURF BEACH” marker flags, the yellow surf beach stands, and the “Surf Beach Facilitators” outfitted in yellow and green uniforms. Members of the beach patrol called surf beach facilitators (SBFs) are assigned to work at the surfing beaches.

The SBF makes sure the operation of the surf beach runs smoothly. They make sure surfers stay within the designated area, while also educating the public and making sure they do not swim in the surf area. The SBF begins their workday at 9:30 a.m., a half-hour earlier than the rest of the patrol. During that time they are talking to beach patrons who are not planning to surf, making sure they understand the surfing beach operation. Although our “Surf Beach Facilitators” are not lifeguards they have much of the same training as a “Surf Rescue Technician” and are prepared to respond to any medical emergency and enforce the laws and ordinances of the Town of Ocean City as well as maintain order on the surfing beaches. As the surfing beaches rotate south through Ocean City the regular guard towers are not displaced so in addition to the Surf Beach Facilitators watching over the activities on that beach the SRT who is usually responsible for the area is still on watch.

The basic concept behind the surf beach is safety. Keeping surfers separate from swimmers and waders is a proactive way to keep everyone safe and happy with the way they choose to enjoy the ocean. Many beach communities throughout the country employ similar rules. To get the daily surfing beach rotation, visit any local surf shop or the beach patrol website at www.ococean.com/ocbp.

For more information about surf beaches, contact Lt. Ward Kovacs at beach patrol headquarters, 410-289-7556. He is the beach patrol Lieutenant responsible for surfing beach operations. Here at the beach patrol our number one priority is your safety, so please keep our slogan in mind and, “Keep your feet in the sand, until the lifeguard’s in the stand!” This simple tip could save a life…. YOURS!

Occasionally during each summer, special event permits will be issued by the Mayor and City Council to hold a surfing event at a section of beach other than the rotating surfing area. These events are usually surfing contests and are attended by hundreds of spectators and competitors and are enjoyable to watch. During these events swimming and wading is prohibited for your safety and the beach patrol will be on the beach making sure the event goes smoothly. Although this may cause you to walk half a block to enter the water, remember that surfing is important to the whole beach experience and although it may tie up a few blocks, swimmers still have over 150 blocks to enjoy.