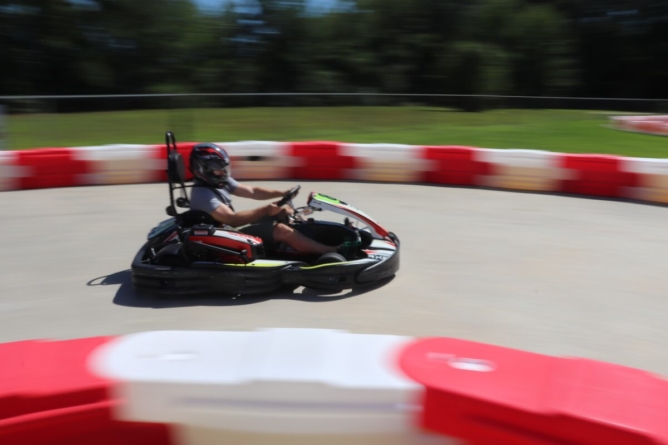 If you’ve got the need for speed, don’t take it out on your fellow drivers who are just trying to make it down to the beach for their summer vacations. Instead of getting you pulled over and saddled with a hefty fine, the radar guns at Pro Track determine which racer has the fastest speed of the summer — which, in this case, would be something to celebrate.

Drivers can, safely and legally, race as fast as their hearts desire at Pro Track, the racing course located at Grand Prix Amusements off Route 50 in West Ocean City.

“Here at ProTrack, these are real racing go-karts,” said Valerie Kramer, General Manager of Pro Track and Baja Amusements. “These are actual racing machines. They go a lot faster, they have a lot quicker pickup and it’s a real driving experience.”

Pro Track’s slogan is “They Ride… We Race!”, a reference to Ocean City’s other go-kart tracks, including the ones at Baja, that are equipped with concession go-karts rather than genuine racing karts. Where concession karts can be driven by younger riders and generally reach speeds of only 15-20 miles per hour, Pro Track’s Sodikart-make racing karts reach speeds of up to 30 mph and are powered with actual motors, unlike the standard electric kart.

Ocean City’s only racing go-karts with real racing go-karts! They have speeds up to 30 mph, and the Sodi RX8 kart is top of the line. Race for the best lap of the season! State-of-the-art timing system (Club Speed) tracks each lap of each driver and compares them. Drivers are ranked byÂ best of day, week, month, season – Race results can be...

END_OF_DOCUMENT_TOKEN_TO_BE_REPLACED

This summer, Pro Track updated the course to make the back straight longer and to make a curve toward the front of the track easier to navigate. However, Kramer assures, the track is still challenging.

The goal for competitive drivers is to obtain the fastest lap of the summer; the course’s timing system measures by the thousandth of a second to ensure accuracy and precision, and the fastest driver of the season gets their name posted on the leaderboard as the winner for the entire year.

Pro Track karts can be driven by both novice and experienced racers, but all drivers must be at least 16 years old with valid ID. New racers are advised to take a practice lap around the track to get a feel for it before they really start racing.

“You need to have the right speed to keep your momentum up for each of the turns,” she said. “If you’re hopping through the turns, you’re losing your speed and momentum, so if you can be smooth through the turns, that’s where the skill also comes through. This track, you almost have to know when to go slower through the turns to be faster in the time.”

2019 marks the third summer of business for Pro Track. Before the course became Pro Track in 2017, it served as a concession go-kart track aimed at families and part of Grand Prix Amusements. (Now, while the businesses are managed by the same people, Pro Track is not included in the Grand Prix wristband.)

Kramer said that it was when she and her team were on vacation and racing motorized Sodikarts at an amusement park that they decided they needed to bring the racing karts to Ocean City.

“We just had a lot of fun when we were racing them and we realized we wanted to bring that to Ocean City — but where can we do that?” she said. “We looked at both of our parks and the design of the track that we already have [at Grand Prix] was sort of the best for it.”

Now, Pro Track fills a niche for Ocean City vacationers who have a need for speed, while Baja Amusements just a half-mile down the street continues to offer concession go-kart tracks for the younger and less speed-minded drivers. Baja also has a 19-hole mini golf course, two climbing walls, bumper boats and three kiddie rides, while the equally-family-friendly Grand Prix features bumper boats, a 24-ft. climbing wall, a moon bounce, bumper cars and even batting cages.

Either amusement park is a safe bet for parents who want to keep their kids entertained for hours, but where Baja and Grand Prix both offer an abundance of fun for the younger crowd, Grand Prix also has the benefit of Pro Track for the older, more adventurous crowd right on-site.