The Ocean City Council voted last week to allow Class 1 electric bicycles on the Boardwalk. However, Class 2 and 3  bicycles are prohibited. 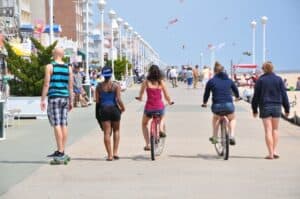 Councilman Tony DeLuca said that the Bicycle and Pedestrian Advisory Committee collaborated with the Ocean City Police Department and a local rental shop to reach a decision.

The vote tally was 4-3, with Council President Lloyd Martin, Council Secretary Mary Knight, and Councilman Dennis Dare opposed. These members spoke against allowing any electric bikes on the Boardwalk due to safety concerns.

Members of the council who supported the change in the city’s code pointed to the fact that Class 1, pedal-assist e-bikes reach speeds of just 20 mph and do not have a throttle. 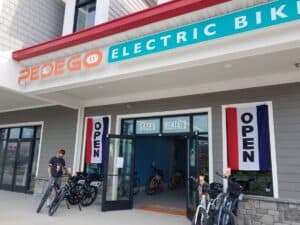 While the council is right about Class 1 e-bikes, Kurt Dawson, owner of the local Pedego Electric Bikes store, believes that the council does not have the full story when it comes to Class 2 e-bikes.

Many of Pedego’s bicycles are Class 2, and Dawson said they do not reach speeds of greater than 20 mph, similar to Class 1 bicycles. Even though Class 2 bikes have a throttle, they also have a pedal-assist system, consisting of five modes. The first level hinders the bike from reaching speeds of greater than 8 mph. Speeds of 20 mph are only possible at level five, which Dawson feels is not necessary on the Boardwalk. He added that when riders were allowed on the Boardwalk, he always alerted them to avoid using the throttle and not to exceed speeds of 8 mph, in the interest of safety. The bicycles have a speedometer, which allows riders to monitor and control their speed.

Dawson does not contest that Class 3 bikes do not belong on the Boardwalk, as they can reach speeds of up to 28 mph. He does hope to see the council change its course when it comes to Class 2 bikes.

“We want the Boardwalk to be an option.” 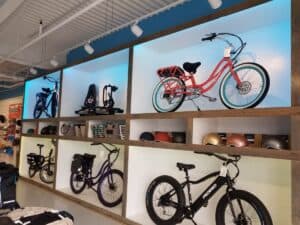 “Instead of figuring out which bicycles are allowed, we should set a speed limit. I would even recommend 8 mph. Since the council is focusing on speed, and Class 1 and Class 2 bikes are the same in that respect, they should both be permitted. We can’t take a privilege away without having the full story, especially since this is how many people get around,” Dawson said.

Dawson also expressed his desire to speak with members of the council and other officials at City Hall. He said that he has reached out but received no response. When Dawson does get in touch with local officials, he wants to discuss the facts about electric bikes. He said that members of the council should have the best information possible before making a decision next time around. He also aims to learn more about the statistics of regular bicycle collisions versus electric bicycle collisions.

This decision is making matters worse for Dawson, with Covid-19 already putting a dent in the new store, the sole electric-only bike shop across the Delmarva Peninsula.

Dawson is hoping that the Boardwalk will once again be a choice for his riders in the near future. However, there are still many options for riders. Dawson explained that the most popular route is from Ocean City to Assateague Island, and that visitors have enjoyed exploring the area, surrounded by wild ponies. Pedego Electric Bikes is open for business each day except for Tuesday.