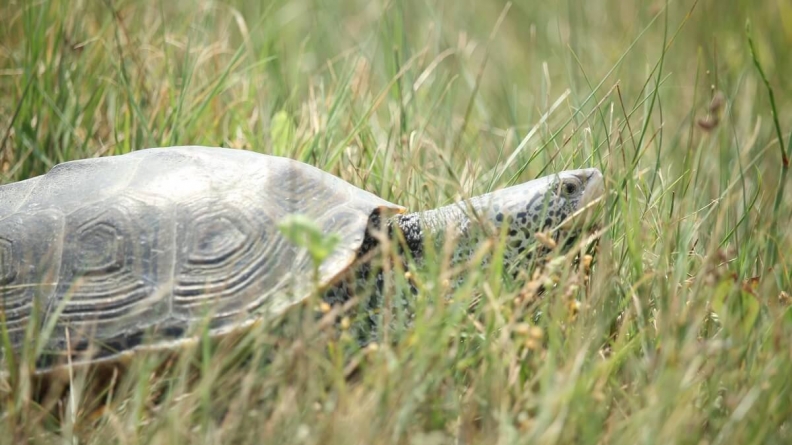 The Air Show wasn’t the only excitement to hit the beach last Saturday – a leatherback sea turtle also, literally, hit the beach. Some spectators thought that the turtle looked to be alive as it was being rocked by the current, but the Ocean City Beach Patrol has said that it was unlikely the sea turtle was alive by the time it was spotted near the shore. There was reportedly a crack in the turtle’s shell, and other markings led some to believe that it died after being struck by a boat.

Delmarva is home to a variety of turtle species, and it’s important that we keep them safe. If a sea turtle washes up on shore, contact the Ocean City Beach Patrol or, at the very least, alert a lifeguard (when live marine animals wash up on shore, the OCBP contacts the National Aquarium). A lot of our turtle species here in Delmarva are endangered – leatherback turtles, like the one that appeared on Saturday, as well as Kemp’s Ridley turtles, green turtles, loggerhead and bog turtles, are all at risk of extinction.

Before I get into the cute pictures of local bayside turtles that BL and I found during our adventures, bear with me while I give you a few tips for protecting the turtles on Delamarva. The first one’s obvious: clean up after yourself on the beach. You should be doing this anyway, but sea turtles can mistake trash like plastic bags for jellyfish, one of their main sources of prey.

If you’re on the beach at Assateague or Chincoteague this summer and you spot a nesting turtle, do not disturb it. If they get spooked, female turtles may “false crawl,” or return to the sea before laying their eggs.

Finally, when boating, there are a few things you can do to avoid incidents like the one that may have harmed our sea turtle on Saturday. When you see a turtle, slow down. Follow the speed limit, and also follow channel markers. Avoid boating in sea grass beds, where turtles live.

Those are just a few small, minimally invasive ways that you can help keep the species safe and alive for many years to come.

There are plenty of reasons why we should try to move the various turtle species off the endangered species list.

Besides being essential to the region’s ecosystem, I think turtles are great because they look like tiny dinosaurs, and it’s weird.

On Thursday, BL and I went on a turtle hunt in the marshes of Fenwick, DE. First, we saw this little guy on the right, swimming around near a fleet of horseshoe crabs.

And then…nothing. It was a humid, overcast day, but we’d hoped that we could at least get some cool bird photos at the least. The bay was not bustling with wildlife on Thursday, only dragonflies.

We did see lots of horseshoe crabs in the water, but that’s not exactly a rarity around these parts.

As we were driving away, we saw another snapping turtle on the side of the road. My first thought was: does he need help?! He looked a little lost, but then I saw that he was headed toward a small body of water not too far from us, and knew not to intervene. Another tip: if you ever see a turtle crossing the road, put your flashers on and help them get across. That’s about the only time that you should pick them up. Otherwise, leave them alone.