Problem solved! After two long weeks, one of Trimper’s strongest attractions on the Boardwalk is returning. The Big Wheel, which first arrived at the beginning of June, faced a zoning violation and was quickly removed just a few days later. Now, after both residents and tourists voiced their frustrations, Trimper’s has brought back the ride in the interest of its customers.

The wheel, owned by Wood Entertainment, will likely make its return on Saturday but could be operational as early as Friday night. Construction began on Tuesday. Previously, the Ocean City Mayor and Council asked Trimper’s to cease operations and either relocate or take down the wheel due to its placement 10 feet over the Boardwalk into the public right-of-way.

City officials wanted to support the longtime Boardwalk business but were in a less than ideal position, as they did not want to set a precedent against enforcing zoning ordinances. Trimper’s President Antionette Bruno and Wood Entertainment have acknowledged their initial mistake.

For each day the wheel remained, Trimper’s faced a $500 fine. Now, by shifting the wheel 11 feet to the west, the wheel is set to return shortly, delighting tourists who were disappointed to see it go. The wheel provides a view like none other from above the Boardwalk and the entire resort. 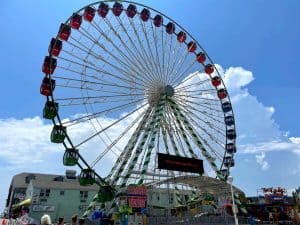 When initially given the option of reconfiguring the layout of the park and keeping the wheel, Trimper’s said they were unable to make the change work and decided to remove the ride. However, after deconstruction, they persevered and found a new resolution by altering the locations of two rides and completely removing another. When push came to shove, Trimper’s decided to take down Techno Power, which of course does not compare to the massive Ferris wheel. Trimper’s also added 12 feet of concrete to their property to accommodate the wheel.

Speaking to WBOC, Wood Entertainment noted that while the cost of the ordeal is far from slim and even reaches six figures, the right thing for the people and the Town of Ocean City was to resolve the problem. Now, all sides have benefited, with the Trimper family bringing in business, City Hall enforcing the laws, and tourists successfully campaigning for the return of one of their favorite attractions. Despite its popularity, the Big Wheel is not the only wheel on the Boardwalk. Jolly Roger at the Pier also has a Ferris wheel, which has been on the Boardwalk for decades.

Stay tuned for more information about when exactly the wheel will light up once again and take visitors for a ride high above Ocean City, Maryland.