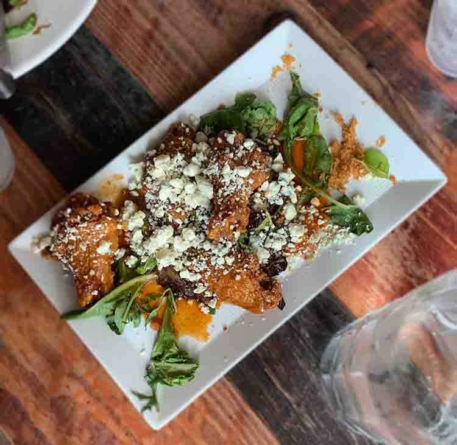 If you want to explore all the unique, local restaurants that make Ocean City unique, there’s no better way than by embarking on the OC Foodie Tour. Founded last summer by local foodie Sandy Gillis, the Foodie Tour offers two leisurely three-hour walking tours, and a boat tour, of different regions – Ocean City’s downtown and midtown – where tourists sample food as they go and get a lesson on Ocean City history along the way.

Any self-proclaimed foodie and/or lover of Ocean City should experience the OC Foodie Tour at least once! While riding to the boat to our first destination, our tour guide, Gillis herself, told us about the history of Ocean City and some super-cool facts. Even as a local, I felt like I only knew the tip of the iceberg about Ocean City’s history, compared to all the amazing knowledge that she has. Her lessons ranged from the history of the Boardwalk to even some different types of seagulls that frequent our beach. She did an impression of the laughing gull which wowed us and made us laugh. Throughout the trip, she impressed us again and again with interesting facts and trivia about Ocean City, even though we were all locals. She even had a binder with pictures she had prepared for us so that we could look at while she talked.

When we arrived at each of the restaurants, the captain of the boat helped each of us get off safely and made extra sure we wouldn’t fall into the water, which was much appreciated.

The first restaurant was Sanibel’s at Sunset Island, and Sandy told us about the owner’s remarkable story. The first thing we had to eat was fried green tomatoes with crab topping. I’m usually not a person who likes tomatoes, but when I ate it, it was amazing! The sauces and crab topping complemented the warm fried tomato so well. The second thing that came out was the signature Sanibel cocktail, but since I’m a minor, I couldn’t taste it. However, the people around me were delighted with the drink and even wanted to learn how to make it at home. When the Sanibel staff realized I couldn’t drink, they quickly brought me a non-alcoholic mix of Piña Colada and Strawberry Daiquiri, which was refreshing and perfect for the warm day.

The third thing that came out was the crab balls, which were super tender and flavorful, especially with the sauce. The texture was tender but not mushy, which was delightful. The last thing we tried at Sanibel’s was the rockfish sandwich, which had bread, tomato, lettuce, sauce, and of course, fried rockfish. The combination was great and all the different textures and tastes came together perfectly.

After we finished eating, the owner Kathleen Kropp came out and welcomed us. She told us a bit more about herself and her business philosophy. It was clear to the entire table that she has a huge heart and cares deeply for other people. She told everyone that all the unused food is donated to a homeless shelter and that she has even hired some people from there as well. While we were eating, the chef came out to greet us and tell us more about the sauce we were eating. It was a secret recipe that he had come up with, made just for Sanibel’s. When he asked us how the food was, we all agreed that it was amazing.

The second stop was Tailchasers Restaurant & Dock Bar, where we sampled Chasers Nachos, house bruschetta, and crab dip with soft pretzels. All the ingredients were fresh, and it showed in the taste. The crab dip had the classic crab taste but wasn’t fishy and the bruschetta included freshly sliced tomatoes.

The nachos had a hefty scope of guacamole and other toppings, which made the chips flavorful and warm. The chips had runoff from the beef and salsa, but they were still crisp because of their freshness.

They even had a playground for children. Tailchasers was a fairly new restaurant, having opened last year at the beginning of June, but they have plenty of seating, a bar and a dock you can dine on. At the end of our meal, the manager came out to tell us more about the food and ingredients. Tailchasers is part of the Hooked restaurant chain and they can do catering as well.

The third stop on our tour was the Longboard Café. They had Prickly Pear Margaritas, which they gave me the virgin form of. It was like nothing I had ever tasted before, and it definitely tasted prickly, but not in a bad way. The drink looked beautiful and the staff explained to us that its purple-pink color came from the inside of the Prickly Pear Cactus. The next thing we sampled was the crinkle green beans, which were warm, crisp and tasty. They were made in a sauce that tasted like it was derived from soy sauce, and the taste of the green beans went really well with it.

Blue cheese crumbles and bacon dust, along with the addiction sauce, topped off the Longboard Wings. Both orders of wings were amazing and the Addiction Sauce really is addicting! The actual chicken under the sauce was tender and easy to get off the bone.

We had the Ahi Tuna Points, last. The seared tuna had sesame seeds, seaweed salad, wasabi cream and sriracha aioli around it, and it was all placed on a wonton. The presentation was fantastic and the taste matched with it. The fish was fresh as well as the other ingredients, so everything worked very well together.

The last place we stopped was Dolles Candyland, located right next to the Longboard Café. Sandy gave us some more information about how Dolles came to be and their history while the staff passed around fudge, taffy and caramel popcorn. The sweets were tasty and the perfect way to end our journey. 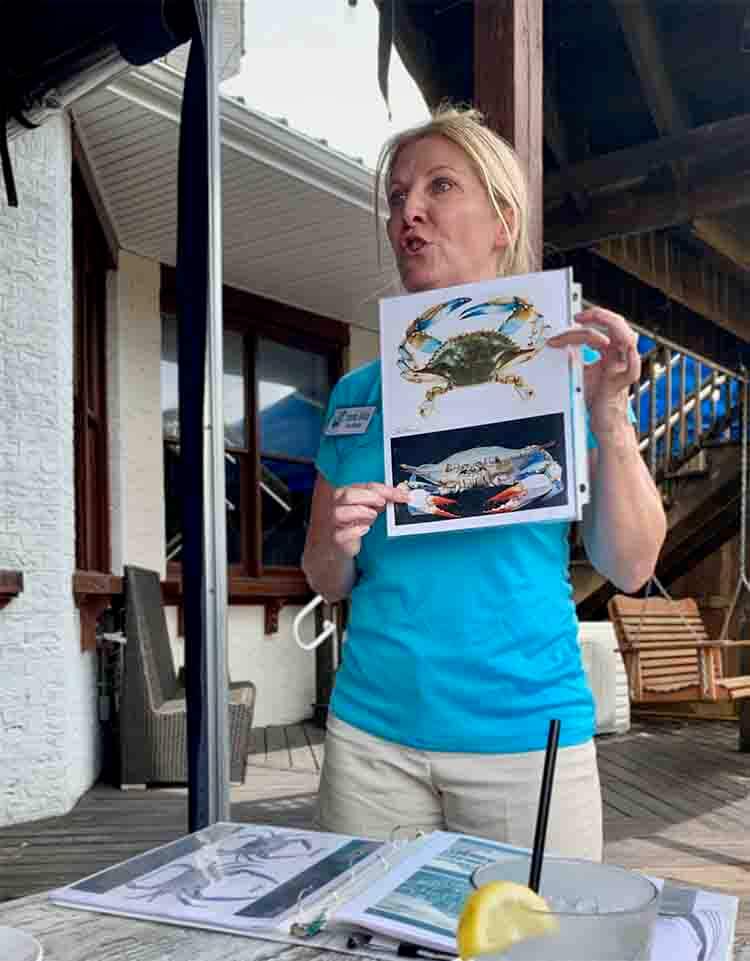 I placed my trust in Sandy and the restaurants we visited, even though I was nervous at first because I can be somewhat of a picky eater. In the end, I was so glad that I tried everything, because not one thing was bad. Each stop had just the right amount of food — it wouldn’t fill you up too much for the next stop. And if you don’t want to (or can’t) drink alcohol, there are no worries because Sandy and the restaurant staff will make sure to get you something you can have.

The tour I went on was a boat tour, but OC Foodie Tours also have walking tours on the Boardwalk. All the restaurants visited are accessible by boat, and all had bathrooms. Sandy Gillis was an amazing tour guide and extremely helpful and knowledgable. She really knew what she was talking about and was super positive and friendly. I would recommend this tour not only to tourists but locals as well! It’s a great way to explore and learn more about the place we call home.

Colleen Shanahan is a 2019 summer intern for State Ventures. She is an artist and writer. She is an Adobe Photoshop Associate and is familiar with other Adobe programs. She has a passion for art, animation, and graphic design. She will be attending MICA this coming fall.