Guide to the 2021 White Marlin Open 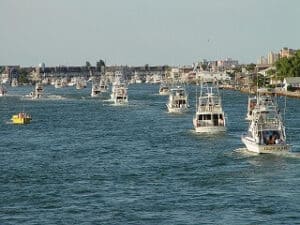 The 2021 White Marlin Open is just a few weeks away, and organizers are preparing for a record year. The pandemic upended plans last summer, and the tournament made countless modifications. Now, there is a feeling of normalcy and relief as people can freely enjoy the world’s largest and richest billfish tournament in the White Marlin Capital of the World. Founded by Jim Motsko in 1974, the White Marlin Open has evolved but stayed true to its mission of world-class fishing over its 48-year history.

The tournament will run from August 2 through 6, and hundreds of boats from across the globe will arrive in Ocean City for a chance to hook record-breaking white and blue marlin, tuna, wahoo, and sharks. With prizes totaling $6.8 million in 2020, the fish caught in this tournament are truly life-changing.

For those unfamiliar with the contest’s format, there are a few basic rules. Boaters can pick three out of the five tournament days to go fishing with as many anglers as they would like to have. An entry fee of $1,450 earns registrants a spot in the tournament and qualifies them for $50,000 in guaranteed prize money. Numerous added entry levels are available depending on anglers’ budgets. Fishing begins early in the day at 8:30 a.m. and continues until 3:30 p.m.

Following the conclusion of fishing hours, the main daily event revered by White Marlin Open fans will return following a hiatus in 2020. Weigh-ins at Harbour Island, located at 14th Street and the bay, attract thousands of people each day of the tournament from 4:00 p.m. to 9:15 p.m. Although the weigh-ins are free to spectators, there are millions of dollars on the line for anglers. For several hours, fans anxiously watch as the day’s best catches are weighed on the scale and bring in massive fortunes for anglers. Two large screens will be set up high above the crowds to provide a closer view of the weigh-ins for those who are not able to directly see the scale. Organizers recommend that people arrive early to secure the best spots at Harbour Island.

If packing in at Harbour Island does not sound like a good fit, the White Marlin Open staff hears you and has added a full-fledged Marlin Fest downtown. An expansion of the additional location added in 2020, Marlin Fest is an idea that organizers floated around for years before the pandemic forced them to kick the plan into gear. Now, with more time to plan, the team has put together an exciting festival atmosphere at the 3rd Street Park on the bayside that expands upon the culture of the tournament for spectators.

Families can bring chairs and blankets to the park to watch the tournament free of charge. Another massive screen will live stream the tournament and weigh-ins as they occur to keep festival attendees in the loop. The event will include daily live music, food and beverage vendors, and activities for kids. In addition to including a perfect view of the bay, visitors will also be able to see many boats passing by.

“Utilizing that location is an idea we’ve always had, and 2020 made us finally move forward with it. Last year, we only had three weeks to prepare and had a hurricane interfere on top of everything else, but even with all those challenges, we still had a great response,” said Tournament Director and daughter of founder Jim Motsko, Madelyne Rowan. “We realized that we should make this into a sister event. We are really excited, and the response has been incredible. Marlin Fest will be a huge event.”

One change visitors should be aware of is that direct shuttle services from the Ocean City Convention Center to Harbour Island and Marlin Fest will not be available this year due to the town’s ongoing struggle to hire drivers for public transportation. However, people can still park at the convention center and ride the bus down to 3rd or 14th Street but will have to make several stops instead.

Parking is also available in several municipal lots in a two-block radius from 3rd Street. These include the 5th Street Municipal Parking Lot and the 3rd Street City Hall lot (after 5:00 p.m.). Churches downtown also typically open up their spaces to White Marlin Open attendees.

Anyone unable to attend either of the in-person festivities can still enjoy the tournament online by watching the MarlinCam, which has previously attracted 350,000 viewers around the world.

So far, it appears as if 2021 will be bigger and better than ever. Over 150 boats of the more than 400 expected have already registered, which is right on track for this stage of planning. Additionally, the contest set a grand record last year for the most prize money ever awarded and plans to surpass that number and possibly give away as much as $8 million. 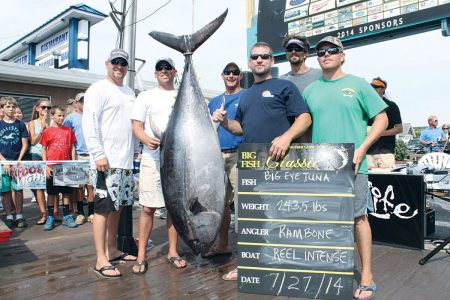 In 48 years of the tournament, the White Marlin Open has grown exponentially. Starting with just 57 boats and one passionate offshore fisherman, the rest is history.

“My dad started this tournament because he loved fishing. He actually worked as a mate on the pier each summer to put himself through college at the University of Maryland,” said Rowan. “In the summer of 1974, he was tired of wearing a suit for his banking job and decided to start what would become the world’s largest and richest billfish tournament. Not a lot of fishing tournaments get crowds of thousands that stand around to watch weigh-ins, and we are proud that we have created something so unique.”