Maryland Governor Larry Hogan announced that all public school systems are authorized to reopen during a press conference Thursday. Hogan issued a sharp warning to local school systems that have yet to consider bringing back students for some form of in-person instruction.

As of Thursday morning, 412 people are in the hospital. This figure is down 76% from its peak 117 days ago.

Eight of Twenty-Four Jurisdictions Have No Plans to Reopen Schools

Despite this progress, eight of twenty-four jurisdictions have no plans to reopen for in-person instruction anytime soon. Hogan said that schools throwing their hands up and making no effort to reopen is “simply unacceptable.”

“In order for us to keep moving forward and to keep making progress, it is absolutely critical that we begin the process of getting our children safely and gradually back into the classrooms,” Hogan said. “There is broad and overwhelming agreement…that finding a way to begin safely returning children to classrooms must be a priority…There is no substitute for in-person instruction.”

While Hogan believes that many of these jurisdictions feel it is easier to issue prolonged closures, he feels it is imperative that students return to the classroom sooner rather than later. In the end, county school boards still have the authority to make final decisions.

The governor and State Superintendent of Schools Dr. Karen Salmon urged schools to reconsider their decisions to remain 100% closed. Changes for the start of the school year are unlikely, as the school year in most localities begins in just ten days. While Hogan would like to see districts flip the switch now, he knows that is unlikely. He hopes to see changes announced by the end of the first marking period.

Salmon announced that $10 million in grant funding will be available for systems that push towards in-person instruction at the end of the first quarter. Resources that are currently available include $345 million in CARES Act funding, technology, grants to address academic accessibility, targeted tutoring, and expanded broadband access. Additionally, Salmon emphasized the importance of schools offering a minimum of three hours of live instruction per day.

Hogan and Salmon will be traveling to schools that have reopened over the next several weeks to observe their progress.

Following these announcements, MSEA, the local affiliate of the National Education Association, responded to the governor’s calls to reopen schools. “The state abdicated responsibility for months for creating reopening standards and told districts to develop their own plans. Now they undercut hard decisions schools have made to keep students and educators safe days before the year begins. This is a recipe for chaos and destruction,” MESA tweeted.

During his press conference, Hogan acknowledged that unions are strongly opposed to resuming any sort of in-person instruction.

Work and Learn from OC 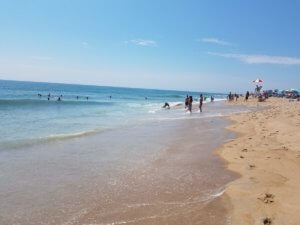 As students prepare to begin the school year virtually, Ocean City is pushing a new effort to bring families to the Beach. “With fewer crowds and beautiful weather, there’s truly no better setting to work remotely than Ocean City, Maryland. Bring your studies to the shore because a change of scenery and a peaceful work haven will ensure plenty of productivity ahead,” the town wrote in an email to tourists.

The resort is promoting several attractions such as the Ocean City Life-Saving Station Museum, the Delmarva Discovery Center, and the Worcester County Library as places for additional educational opportunities.

Susan Jones, Executive Director of the Hotel-Motel-Restaurant Association, believes that parents and students will find Ocean City to be the perfect education destination. “The fall is a gorgeous time of year in our special town. Kids and parents are at wit’s end and mental health is a real concern for many parents who are worried about their kids,” Jones said. “Sitting on a hotel balcony and watching a zoom lesson will provide a relaxing atmosphere and allow for a little fun.”

Many hotels are offering special packages to bring people down to the ocean. This may help to recoup losses from the pandemic.

Logan Dubel is a contributor for OceanCity.com and a junior at Franklin High School in Baltimore County. You can catch his newscast, This Week in Ocean City, on our YouTube channel, SeeOC. He joined the OceanCity.com team in June 2020. In addition, he serves as a freelance writer for the Art League of Ocean City. Logan has a strong passion for covering the news and its impact on Marylanders. He serves as the public address announcer at Franklin, welcoming fans for soccer, football, field hockey, and lacrosse games. Logan is also the news and managing editor for Franklin's publication, The Gazette. Additionally, Logan is involved with Franklin's internationally recognized mock trial team and is currently participating in a legal reasoning mentorship at Vanderbilt University. In March 2021, Logan was a finalist for Student Member of the Baltimore County Board of Education, advocating for the truth and transparency. In college, he plans to study broadcast journalism.