All Fireworks Canceled After Unintentional Explosion

Independence Day 2021 was supposed to mark a return to normalcy in Ocean City, but after an accidental release of fireworks on the beach, that is surely not the case. Downtown fireworks were initially canceled and now other displays uptown at Northside Park as well as at Seacrets have been called off out of an abundance of caution. For those who watched the fireworks detonate Sunday morning, those are the only displays they will see in the skies of Ocean City this Independence Day.  Fireworks at all three locations were managed by the same vendor, Starfire Corporation.

In a statement early Sunday afternoon, the Town of Ocean City noted that the cause remains unknown and that safety is their top priority. “A perimeter around the fireworks site has been established and will remain in place until the safety inspections are complete, which could take several days.  At this time, areas of the Boardwalk have also been closed to pedestrian traffic until a thorough safety inspection has been completed.” According to Councilman Peter Buas, the Boardwalk is now back open following seven hours of hard work.

The Ocean City Fire Department says that at approximately 10:15 a.m., they received a call for a vehicle fire at Dorchester Street and the Beach. The area was immediately evacuated and a significant portion of the downtown beach remained cleared for hours as a result of the mishap. Approximately four blocks of the Boardwalk were closed. When crews arrived, they did not see a vehicle fire but instead saw that fireworks intended for release tonight had accidentally discharged and exploded. Initial reports indicate that while taking out the fireworks from the Ryder truck carrying them, one firework accidentally discharged, leading to others exploding as well.

Employees of the fireworks company suffered minor injuries but refused transport to the hospital. No beachgoers were injured.

Ocean City Fire Chief Richie Bowers noted that safety precautions were in place, and those actions helped avoid any major injuries, “Prior to the fireworks being off loaded from the vehicle, Fire Marshals secure a safe zone around the fireworks and put other safety protocols in place,” Bowers said. “It is this very zone and safety protocols that kept anyone else from being injured.”

Employees from Starfire Corporation were unavailable for comment on Sunday afternoon. This is the first time the company worked with the Town of Ocean City to put on a fireworks show. After these events, it is possible it will be the last. Celebration Fireworks, the company previously responsible for displays in the resort, backed out of the Ocean City show due to constraints on their business as a result of the pandemic. In April, Ocean City Today reported that the company hoped to focus on smaller shows in the Pennsylvania region amid staff layoffs. At the time, council members voted unanimously to approve Starfire Corporation’s agreement for Independence Day 2021, and already considered hiring them for future events based on the success of July 4th. The company, also located in Pennsylvania, previously bid on the contract.  After Sunday’s mishap, it is likely the town will be looking for a new vendor for New Year’s and Independence Day 2022.  Unfortunately, the massive failure for the estimated $65,000 show, a $10,000 increase from last year’s contract, is a “performance” people will never forget.

Fireworks in Ocean Pines, managed by a different vendor, went on as planned at 9:15 p.m. Despite many reminders that the resort prohibits fireworks, many independent illegal displays continued throughout Sunday night. 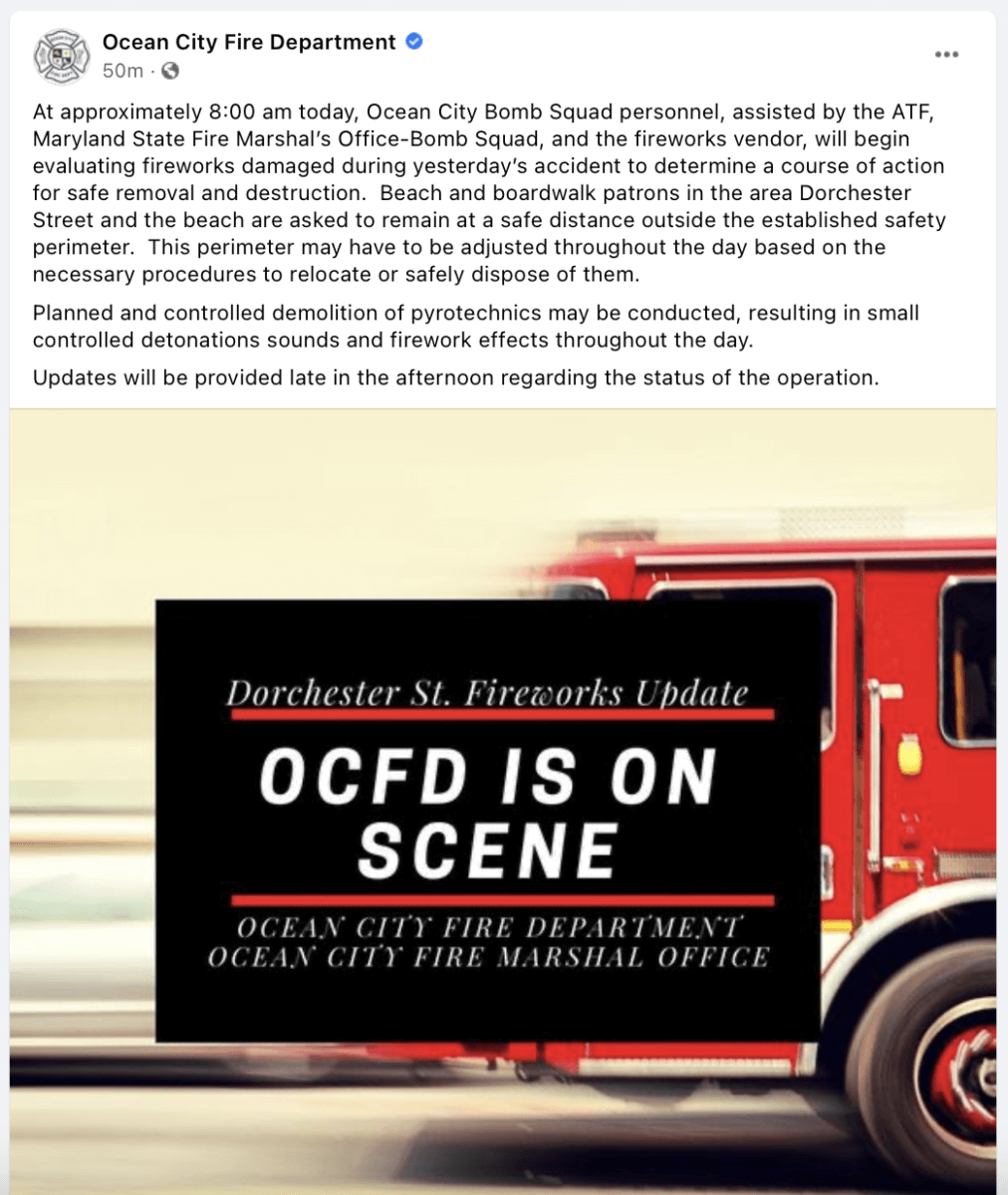 *This story is developing, stay tuned for updates*