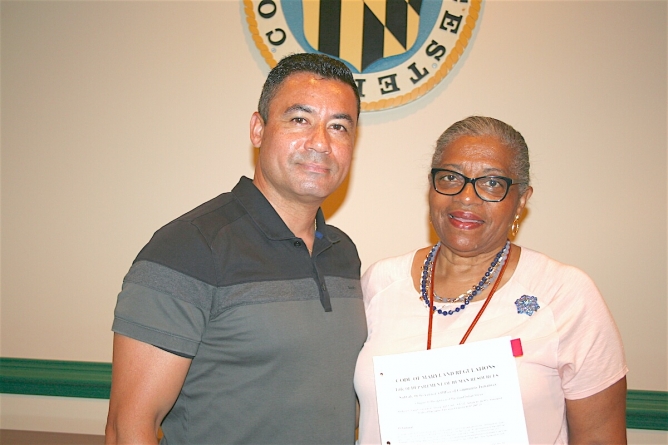 Worcester County Commissioner Diana Purnell was recently appointed by the Maryland Commission on Indian Affairs to serve on the Recognition Advisory Committee.

The Maryland Commission on Indian Affairs works to serve as a statewide clearinghouse for information, to identify unmet social and economic needs in the native community, to support government education programs for American Indian youth, to provide support in the process of obtaining Recognition of State and Federal Indian Status, and to promote the awareness and understanding of historical and contemporary American Indian contributions in Maryland. The five-member Recognition Advisory Committee, which Commissioner Purnell will serve on, is tasked with reviewing petitions from Native American tribes, bands, groups or clans that are indigenous to Maryland and are applying to the Maryland Commission on Indian Affairs for formal recognition of Maryland Indian status.

Commissioner Purnell is part Native American, a descendant of the Coharie Tribe of North Carolina. She states that heritage is vitally important, shaping lives and communities.

“Heritage has always played a key role in who I am and aspire to be,” Commissioner Purnell said. “All tribes are family, regardless of where we hail from, so I count it a real honor to be able to serve on the commission. We all need to know who we are, where we came from, so we can grow and learn to appreciate one another’s diverse backgrounds and how they contribute to each other and our communities.”

In addition to her position as a member of the Recognition Advisory Committee, Commissioner Purnell, a representative of District 2, also serves on the Worcester County Drug and Alcohol Abuse Council and its subcommittee The Opioid Awareness Task Force, and the Worcester County Social Services Board. She is also an active member of the Atlantic General Hospital Foundation Board, the Worcester County Branch of the National Association for the Advancement of Colored People (NAACP) and St. John’s United Methodist Church.