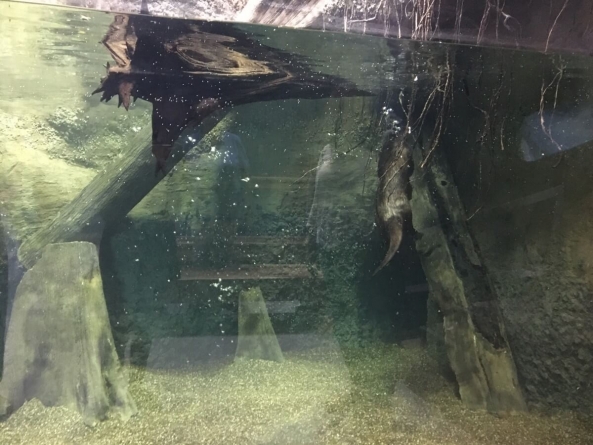 When I walked into the Delmarva Discovery Center on Friday afternoon, it was the first time I’d done so since the 4th grade. It was quiet as I’d remembered it being as a kid, but that was just on the surface. Little did I know an energetic team was assembled just steps away from where I stood. Something big was happening. Something big indeed; something I would have noticed had I paid attention to the giant sign advertising the Wally Gordon River Otter Exhibit. That’s right. A River Otter Exhibit in downtown Pocomoke City.

Upon my arrival, I was promptly introduced to Stacey Weisner, the president of the Delmarva Discovery Center and Museum, and Jackie and Kate Gordon, the mother-daughter duo that donated the exhibit in memory of the late Wally Gordon. Wally Gordon was a prominent businessman in Pocomoke City. He owned a seafood cannery in the business park. Described as extremely outgoing and lots of fun by his wife Jackie, Wally Gordon loved to have a good time. He played a big role in the original concept of the Discovery center and truly believed in what it would do for the city of Pocomoke. The Gordon Family lived on the Pocomoke River. Jackie and Wally would often relax outside, watching the river otters’ antics. So the idea for a River Otter Exhibit in his name seemed appropriate.

It wasn’t long before I was being introduced to the stars of the exhibit: McKendree and Tucker or Mac and Tuck for short. The two otters had just arrived that morning and were getting used to their new home. Mac, who was named fittingly after Wally, seemed to be adjusting well, while Tuck was taking a bit longer to warm up. Mac was active and adventurous, swimming around the aquarium and finding hiding spots. Tuck on the other hand, chose to hide out in the crate the two otters had arrived in for the duration of my visit. We were left searching for his silhouette in the box.

Mac and Tuck were rescued. They were originally from Louisiana where they were considered nuisance otters, causing problems on a local crayfish farm. They were live-trapped before being sent to a rehab facility in Ohio. From there, they traveled to the Salisbury Zoo where they stayed for a week before arriving at the Discovery center.  The zoo has been a great partner in the process.

The otters are being well-cared for. They are fed three times a day and their habitat is cleaned twice daily. They are carefully observed and have been vaccinated. More so, they are being handled by well-trained keepers, like Hannah who has gone through extensive training in aquariums on the East Coast.The keepers have plenty of enrichment activities planned to keep the otters occupied and happy, as they are rather intelligent animals.They will play a big part in the museum, with many events being planned around them. One that is already in planning is a sleepover with the otters–a “Night at the Museum” affair, where people of all ages are invited to spend the night at the Discovery Center. Participants can sleep in front of the aquarium, play otter-themed games and hopefully watch an otter-themed movie.

A Year in Making

The River Otter exhibit was over a year in the making and required thorough planning and a great team effort. A team effort that was quite apparent at the museum on Friday. Walls were being painted, and banners were being hung, among many other tasks that were being completed in preparation for the exhibit’s grand opening. Local contractors contributed to the construction of the exhibit and Holly Grove Christian School made a banner to be displayed when it opens.  But the effort and cooperation extends past Pocomoke City’s bounds.

The exhibit was designed by Luke and Ron of Makers-of-Things, based in New Orleans. The pair has done work for the  National Mall and the World War 2 museum in New Orleans. The River Otter exhibit started with Luke sketching drafts and building a model, which you can find in the front lobby of the museum. 85% of the exhibit was designed in his New Orleans backyard before being transported to Pocomoke City.  Stacey Weisner noted that this makes the whole project come full circle, because Mac and Tuck were from Louisiana too.

The designers paid close attention to details. Pocomoke Cypress knees are featured in the background to include the river’s famous trees. Seashells lay on the bottom of the water to represent Wally’s seafood cannery. The logs in the tank were meticulously crafted out of wire and cement to serve as hiding places for Mac and Tuck. Everything was considered in the design process. The museum is happy with their work says Weisner, calling them true professionals. The donors are happy too. They were very hands-on in the process, investing their time as well as their money. Kate explored the exhibit from the inside noting that it was very exciting from the otter perspective.

If you would like to meet Mac and Tuck yourself, visit the Delmarva Discovery Center in Pocomoke City, Maryland. It is open seven days a week from 10am to 4pm on Mondays through Saturdays and from 12pm to 4 pm on Sundays. Visit delmarvadiscoverycenter.org for admission rates or buy an annual family membership for a one time cost of $50. The Wally Gordon River Otter Exhibit opens to the public on Monday, July 25, 2016. You don’t want to miss this exciting new attraction or the history behind it, trust me.

LeAnn is an intern with Oceancity.com. She's a junior at Pocomoke High School where she balances her time between studying, sports, and various extracurricular activities. A jack of all trades, LeAnn has pursued everything from Youtube and Wattpad to blogging and graphic design. She enjoys Chai tea, bargain shopping, a good book, and all the knowledge the Internet has to offer. In her free time, you can find her reading and relaxing on the beach or scrolling through Tumblr.