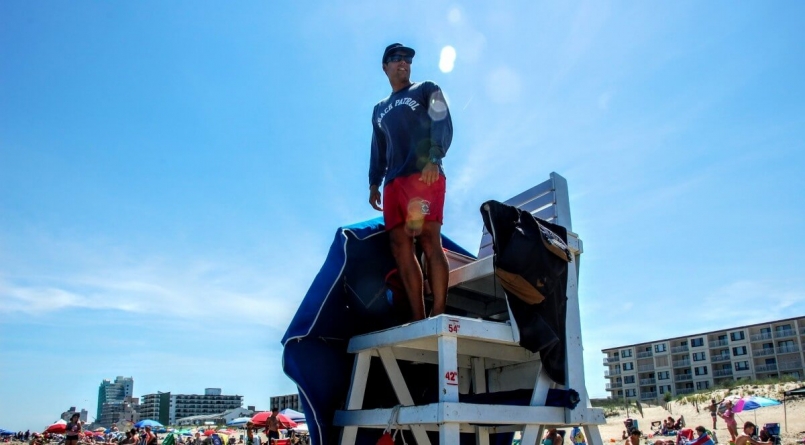 After 11 years working the inlet, OCBP crew chief Kevin Johnson moved uptown. Part of the attraction was a new view and new patrons to look after, sure. But the move was also tied to a larger culture wherein getting to know as much of the beach as possible both enriches the job and gives the crew chiefs and other OCBP members  a better overall view of the beach they call home for the better part of every summer.

The Ocean City Beach Patrol is helmed by people who have been guards for a decade or more. What makes is effective and functional is that the management structure is build upon this kind of commitment to the beach and to the job. Being talented is important, but so is being wise. OCBP management cultivtes a kind of beach wisdom by learning all of the job in as many of the places as possible.

Kevin Johnson became an SRT after graduating from Stephen Decatur. His brother was on the beach patrol and Kevin thought it would be a fun summer job. More than a decade later it has become much more than that.

Moving up the ranks in the Ocean City Beach Patrol

It didn’t take Kevin too long to realize that he wanted to move up in the beach patrol. He was substitute teaching off season and in season he thought he had more to contribute. Taking on more responsibility for a job that already comes with life and death decisions isn’t something he went into lightly, but it was something he felt he was ready for. He not only wanted to contribute more to the OCBP, but knew that he could be helpful in cultivating crews for the coming generations.

When he started as the crew chief of crew one, down in the inlet, he had his chance to start affecting the OCBP’s big picture in small ways.

‘A different way of guarding’

Starting at the inlet and working your way north the character of the beach as well as that of the patrons begins to change. The inlet beaches tend to attract shorter term guests. Day trippers and weekenders, people who may be less familiar with Ocean City or who may visit less regularly. This isn’t a hard and fast rule, but as broad stoke descriptions go, it is close to the mark.

Moving north, the blend changes. The proportion of people who are there for the week or two or even for the entire summer flips. Lifeguards get to know the people on the beach in a different kind of way. The intellectual requirements are different.

At the Inlet, there are more general questions and more of them. As you move uptown, the relationship between the guards and the patrons changes to one that is based on longer term interactions. The training for each, though informs the way guards respond.

Kevin said keeping interactions friendly, accurate and brief while scanning the water is something that is ingrained as part of the OCBP training.

“You learn to answer any questions beach patrons have keeping your eye on the beach,” he said. “During the academy, it is reinforced, ‘Eyes on the water.’”

This is the last year Kevin will be a 20-something crew chief. Looking 30 in the face, he knows that the physical part of the job is the challenge he will have to rise to every year for the rest of the time he works for the OCPB.

“The job keeps me young, we’re working out all the time,” he said. “It does get a little harder.”

Hanging out with the younger people doesn’t just help keep him young, it also wakes his competitive urges. After 11 years he still is one of the top swimmers on the patrol, and he expects to keep it that way by keeping in shape during the off season. But in the middle of July, the off-season seems a million years away.