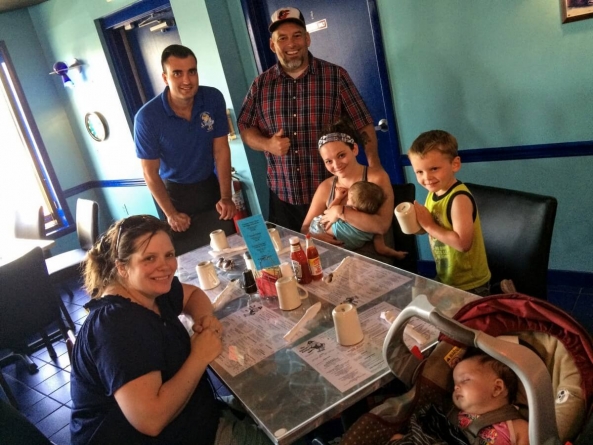 It may have been the sun, or it may have been the early hour (11:30 a.m. during Senior Week is the equivalent of 4:45 a.m. regular time) or the massive amounts of food they just had enjoyed, but Dylan Orland and Patrick Mullineaux were squinting and moving just a little slower than one might expect as they left the General’s Kitchen. It was Dylan’s first time in Ocean City but Patrick’s family has a place in town and for him, as it is for many, breakfast at the storied Ocean City restaurant is part of the summer culture.

“When I’m down here with my family we always come, and even though I’m renting my own place this time, it’s just something I look forward to.”

Patrick had had the creamed chip beef omelette, so that fact that he was upright was kind of amazing, but he was a practiced General’s Kitchen patron. Dylan, on the other hand, was still a little surprised he had gotten through the Spanish omelette, “It was a lot of food,” he said.

Just as overindulgence can be the symptom, a hearty breakfast with just enough grease can be the cure, which likely is why the creamed chip beef omelette (or any of the CCB-based dishes at the Kitchen) tend to be popular. Breakfast is a satisfying time and meal. Lunches can be rushed, dinners can be overwrought, but if you’re going to sit down to breakfast while on vacation, time likely is your ally. Especially at General’s Kitchen

While they are on their third location, the iconic name has remained the same, but they have existed at multiple addresses in Ocean City, the staff stays pretty regular. And the staff knows how to navigate breakfast. Owner Bob Noll said most of the staff had been on for multiple years, and many had been on for more than a decade, which is impressive for a restaurant that has been open for nearly 50 years.

Over the last half-century there have been changes beyond just the location. Over recent years, Bob had noticed that families and young people sometimes were only half in the mood for breakfast. It started with the occasional request for chicken fingers for the youngsters, but has grown into a respectable lunch menu.

At first, it was a bit of a mental transition. After all, when you are known as the go-to breakfast place, why fool about with lunch. But, just as when they were building their reputation as breakfast people, Bob elected to do a few things very well and grow from there.

“We had some people in here this morning who were the third generation of people coming here for breakfast,” Bob said. “It is gratifying to have so many people coming back that long.”

Parents who bring children and then grand children to an Ocean City establishment of any sort are the core of what keeps the resort vibrant. It isn’t just for one generation at a time but rather a geographic touch stone for multiple generations who can enjoy it separately as well as together. Like, maybe the cream chipped beef omelette for some and a nice BLT with fries for others.