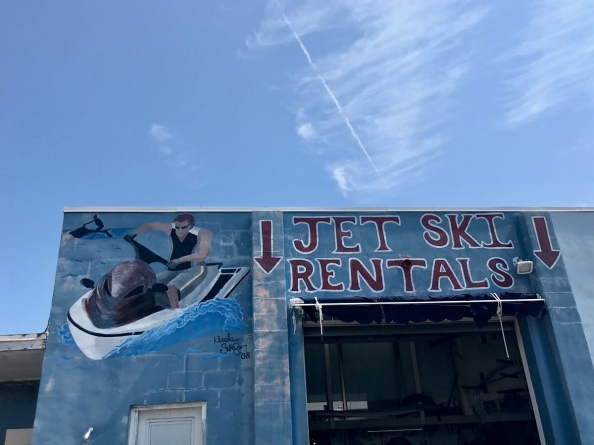 I was going to say something snarky like, “The best place to jet ski in Ocean City is… the water!” but decided against it. There are plenty of people who come to Ocean City just for the watersports, and they’re serious about their jet skiing. With so many places to do it — we are a peninsula surrounded by water on both sides, after all — the various watersports categories for “Best Of” might just be the most important of them all.

Here, I’ll relay the people’s consensus as of April 25. You have until Memorial Day (May 28) to place your vote, and the Best Of for every category is still anyone’s game. Vote, and then tell your friends and family to vote, so we can recognize all the businesses that make Ocean City great.

The current first-place for Best Jet Skiing in Ocean City goes to Odyssea Watersports. That’s no surprise, as they won “Best Of” in 2017, 2016, 2015 and 2014. Action Watersports is the usual suspect for runner-up, and they’re currently in second place this year, too.

If you disagree with either of these, and think that OC Bayside Rentals, Bayside Boat Rentals (seen in the cover image above), OC Baysports or another business entirely should take the crown, you’re going to want to vote for them ASAP!

Parasailing is about as much fun as jet skiing is, but about 100x more peaceful. Jet skiers rule the waters, while parasailors just enjoy the view and wave to the jet skiers down below. As far as the Best Parasailing in Ocean City is concerned, OC Parasailing is in the lead with OC Watersports close behind.

If you’ve ever been parasailing, you know what a magical experience it can be — pass that magic along and vote for the best parasailing in town.

There’s an entire unique ecosystem in Ocean City’s waters that you won’t get to see while cruisin’ on a jet ski or peering down from hundreds of feet up in the sky on a parasail. You can, however, get up close and personal with the water and all that lives in it, on a kayak. In fact, many kayak rental shops in Ocean City even offer guided eco-tours.

In the lead for Best Kayak Rental/Experience right now is 48th Street Watersports, followed by Coastal Kayak, and with “other” — those are the write-ins — a close third. Could the Best Kayaking go to an “other” this year? Only you can decide.

We may not have a category for “Best Surfing,” as that’s pretty much dependent on the individual surfer, but we do have a category for Best Surf Shop. Where you get your boards and boarding gear matters. Even if you’re not a surfer, while on vacation in Ocean City, we’ll let you dress like one anyway. Malibu’s Surf Shop currently takes the lead, but K-Coast, Quiet Storm and and Ron Jon’s Surf Shop aren’t too far behind.