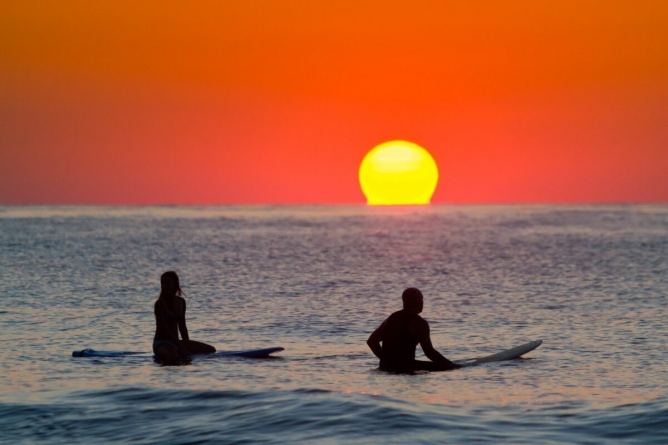 The Art League of Ocean City is most well-known for showcasing the talents of local artists. From paintings to photography to, most recently, film, the two-story gallery on 94th street bayside has been a hub for Delmarva creators of all kind.

But since 2015, there’s been one pop-up exhibit at the Art League that steps beyond the local art scene and expands its scope far past the Atlantic Ocean. And this exhibit, while it incorporates artists from all around the world, still speaks to the culture and landscape of Ocean City.

The exhibit is the one-weekend-only, end-of-summer J1 Photo Show. Students from abroad who live and work in Ocean City during the summer on a J-1 work Visa submit the photos they’ve captured during their time in Ocean City, allowing visitors to “see Ocean City through the lens of international students visiting for the summer,” according to the event’s Facebook page.

“This is the second year we’ve done this, the first being in 2015,” said the Art League’s Gallery Manager Katie Brown. “The idea came from an Italian art student Claudia Mazzola, who was here for the summer and helping with our kids summer camp.”

The exhibit will only be up for the weekend–from its First Friday reception to Sunday, September 3–until next year, when a new wave of photography will hopefully be displayed again to represent the 2018 students’ time spent in OC.

As for the content of the photos, exhibit-goers can expect to see a range of sunset pictures, shots of the ocean and groups of friends hanging out and enjoying their time at the beach.

This year, the opening reception falls on September 1, from 5 to 7 p.m. in the Art League’s first-floor classroom. The reception is free, and visitors will be able to enjoy refreshments and meet the international artists whose photos will be on display.