In 2019, over 400 boats registered to fish in the White Marlin Open and over 1,000 white marlins were caught during the first three days of the tournament.  Many of us love to watch the boats head into the ocean anytime after four o’clock in the morning and all have to return to have their catch weighed in by 9:30 pm.  All lines have to be out of the water at 3:30 pm.  There are some exceptions, like when you are fighting a blue marlin.  All anglers who catch a fish in the tournament can fly fish flags to show what they have caught.  There is a long history and even a protocol to flying fish flags.  The best article I could find on this practice is by Captain Karl Anderson on MarlinMag.com.

Flying flags has a long tradition in seamanship and conveys much meaning to others on the water.  We will focus on the fish flags flown by competitors in the White Marlin Open in Ocean City, Maryland.

Flying fish flags communicates to others what you caught.  It is also used as marketing to communicate your prowess.  For those of us on the shore, it’s a great way to know what’s coming to the weighing scales.  Frequently, those closer to the inlet will radio ahead and tell the tournament officials which flags are flying on incoming boats.  The officials in turn tell the spectators which fish will soon be at the scales.  According to Captain Anderson, traditionally, the flags should be on the rigger in order of species size.  Billfish take precedence over other species.  This means that typically, the bluefin flag flies above the others, but in Ocean City’s White Marlin Open, the white marlin flag is first.  Anglers hoisting flags should fly each flag with a flag width separating them.  If done this way, observers can more easily see from a distance what flags are flying.  Captain Anderson also says that keeping the flags down 1/4 of the way from the top of the rigger makes them more visible.  I’m not sure what you do when you’ve caught fifteen fish as I saw in 2019’s tournament.    Small red flags with the letter “T” flown under a fish flag means that the fish was tagged before being released.  In Ocean City, the upside down flags mean the fish was caught and released as was the practice in the 70s and 80s when releasing fish became more popular.  Elsewhere in the world, according to Captain Anderson, fish flags flying upside down means the fish was taken and a flag showing a swimming fish, right side up, means the fish was released and swam away.

You NEVER fly your fish flags the day after your catch.  Captain Anderson describes seeing another captain’s flags removed by other anglers and nailed to the dock in Ocean City when that angler neglected to take them down before morning.

Sundot, CaptHarry, and Others have complete sets of fish flags.  Here are some versions for the primary fish in the White Marlin Open: 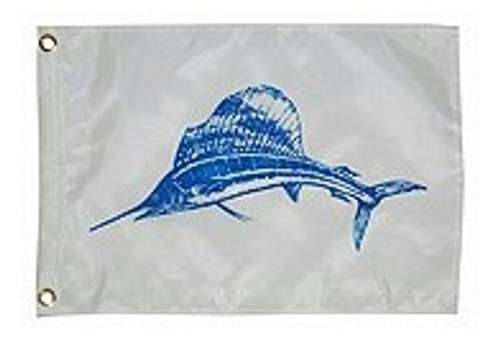 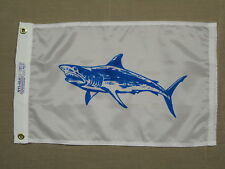 Ann has been with StateVentures since 1999. She moved from Annapolis to Berlin, MD to be closer to Ocean City. She splits her work week between the two locations to help clients and visitors get the best information and value out of our sites. She loves a camera and any excuse to use it.  Her kids are both grown and off adventuring.  Ann loves to travel with her kids and lives with her dog Marley when she's not in Virginia fishing.