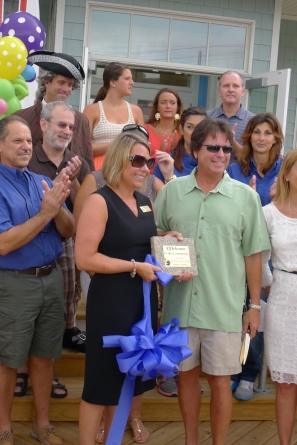 (Dec. 27, 2013) New businesses cropped up while veteran restaurants, nightclubs and motels celebrated milestones in Ocean City this year. From a boom of new craft breweries to sky-high thrills a new jetpack operator brought to the city, here are some of the resort’s 2013 highlights in business:

• Ocean City Square got a major facelift at the start of 2013 with new siding, glass fronts, signage, landscaping and lighting at the uptown building.

“I was thrilled when I found out the list of nominees,” said Susan Jones, executive director of the Ocean City Hotel-Motel-Restaurant Association. “We are very fortunate to have so many award-winning restaurants and business leaders in our town.”

• Owner Justin Schaub opened Peaky’s Rooftop Restaurant & Bar in late February after a month of renovations to the former Skyline Bar and Grill on 138th Street.

• Bonita Beach Hotel on 81st Street became the fifth property managed by the Carousel Group in mid-February. The group planned to renovate the building before the start of summer 2013.

“We’re all about the cheesesteak. That’s all we do — that’s why we do it the best,” Mensh said.

“So many people say they’d love to eat [healthier]. Now they can come here and get home-cooked, fresh food,” said owner Nancy Bolt.

• Café Mirage reopened under new ownership on May 2 in the 128th Street Montego Bay Shopping Center. Owners Jay and Krista Ball created a new menu of American fare “with a twist” and added outdoor seating that overlooks Northside Park.

• Hooked opened on 80th Street in May, making it the first River Seafood Company restaurant to open outside of Delaware.

• Old Prof Golf celebrated its 50th anniversary in the resort May 4. Owner Herb Schoellkopf offered games for 50 cents a round at Old Pro centers around Ocean City to celebrate.

• After a cold, rainy spring, Memorial Day brought a welcomed boom in business in the resort.

“Business-wise, everyone did pretty well,” said Jessica Waters, communications manager for the Town of Ocean City. “It was a good way to kick off the summer.”

• The 1st Street Bistro opened in mid-May and quickly became known for its low prices and good portions.

“They can feed their family in here for $20 and that makes their experience more enjoyable,” said Don Quackenbush who runs the bistro that sells everything from Belgian waffles to cold-cut subs and garden salads.

• The Bank of Ocean City opened in a new building on 59th Street just in time for the summer season.

“We’re glad to be back here,” said Jason Parker, branch manager and assistant vice president. “All of our customers are glad we’re back open.”

• Treasure Island — “A Wild and Wacky Women’s Boutique” — opened in the Inlet Village on the Boardwalk last summer.

Delmar Smith, who owns Treasure Island with his wife Dena, called the business “a fun, trendy stop for women.”

• The family-owned and run Lankford Hotel on the Boardwalk got a makeover on the Travel Channel’s “Hotel Impossible” show in June. The show aired late in the summer, with by physical and managerial updates to help the Sally Rutka’s business.

• Shorebilly Brewing Company opened on the Boardwalk over the summer with two homebrews and soon expanded its offerings to five craft beers.

“I felt there was a pressing need for Ocean City to have its own beer — a local, homemade beer with local ingredients to call its own,” Owner Danny Robinson said.

• The Angler restaurant on Talbot Street celebrated its 75th anniversary in June.

Owners and sister Jayne Kendall and Julie Smith marked the event with some major overhauls, including the addition of a new boat-shaped bar and deck overlooking Route 50.

• Seacrets celebrated 25 years of business on June 29 with live entertainment and  an anniversary fireworks show.

Originally a small, private club seating about 100 people, Leighton Moore’s business has become one of the resort’s quintessential nightspots with 18 bars, six indoor and outdoor dining sections and a lineup of nationally recognized acts hitting its stages each summer.

• Boardwalk pub and restaurant Shenanigans also celebrated its 25th anniversary last summer, with plenty of Guinness and its signature green Shillelagh to go around.

Since he opened the business, Greg Shockley has more than doubled Shenanigans’ outdoor dining area on the Boardwalk and refocused its emphasis from drinks to food.

• The Kite Loft was the first Worcester County business to benefit from impact funds generated at the Casino at Ocean Downs. Owners Jay and Mary Lynn Knerr received a loan for $64,000 for their new 67th Street location in July.

• The new 67th Street TownCenter officially opened with a ribbon-cutting ceremony on July 11.

• The Drunken Noodle opened at 45th Street on July 17, bringing sushi, noodle dishes and other Asian cuisine to the resort’s mid-town. The eatery serves more than 20 sakes and flavored sakes and dishes under $12, said General Manager Jeff Burton.

• Just in time for the end of the summer season, Odyssea Watersports opened the Jetovator for business.

The water-powered jet bike takes riders up 30 feet in the air over the water for an “unreal feeling,” said Jetovator pilot and co-owner Sean Crosariol.

• Seacrets launched its Seacrets Service transporter in September. The free shuttle service takes patrons to and from Seacrets from any location in Ocean City, West Ocean City, Ocean Pines and Berlin.

• The restaurant that won “Best Burger in Baltimore” opened on 126th Street in Ocean City this summer. Abbey Burger Bistro lets diners build their own burger for $10, with Maryland-raised beef or more unusual meats like bison, kangaroo and camel on the menu.

“You won’t get anything like you get here,” Owner Eric Leatherman said.

“From day one, whether it’s tourists or locals, people have found out we’re here and have turned us into their ‘office away from home,’” co-operating partner Dana Gottloeb said.

• The Flamingo Motel on 31st Street celebrated 50 years in business in 2013. Over the years, the business grew from 23 to 112 rooms, adding telephones, TVs and air conditioning along the way, said owner Rose Brous.

• Buck Mann celebrated 40 years in the community management business at his company Mann Properties, Inc. in 2013. The 16th Street business oversees about 90 properties from the inlet to the Delaware state line.

Diakonia’s Route 611 thrift shop Used To Be Mine expanded into a third unit in early 2013, tripling its original size.

“We really wanted to offer large furniture and now with the additional space we can do that,” Diakonia’s Executive Director Claudia Nagle said.

“We love the community and we’re excited to help strengthen individuals and families,” Dotson said.

• Chris Wall and Lloyd Whitehead celebrated 20 years as owners of Harborside Bar and Grill on April 7 with food and drink specials, prize giveaways, live music and a pig and bull roast.

• YogaVibes opened on Route 50 on April 1, bringing hot yoga to the area. More than a dozen instructors work at the studio, which sold out some classes and added more in its first month.

Stores around the state, and eventually across the coast, will carry the West Ocean City brews, said brewer Vince Wright.

Harrison bought a printer to do his work in-house, thanks to a Video Lottery Terminal (VOLT) Small Business Loan, funds from Ocean Downs Casino available to small, minority and female-owned businesses in Worcester County.

• Waterman’s Seafood Company reopened with a ribbon-cutting on Nov. 1, just over a year after a fire gutted the 30-year-old restaurant.

The everything-Christmas shop Christmas Pointe closed at the end of 2013 after serving Ocean City for more than 40 years. Owners Chuck and Linda Dondero closed their store in the Tanger Outlets center to retire.

Owner Dawn McGee used her favorite vacation spot, the Florida Keys, to inspire the renovations, which she said brought a “Key West flair” to the restaurant off Route 54.

The business located in the Harpoon Hanna’s parking lot brought the Jetlev to thrill seekers over the summer, hoisting them up to 10 feet in the air over Montego Bay.