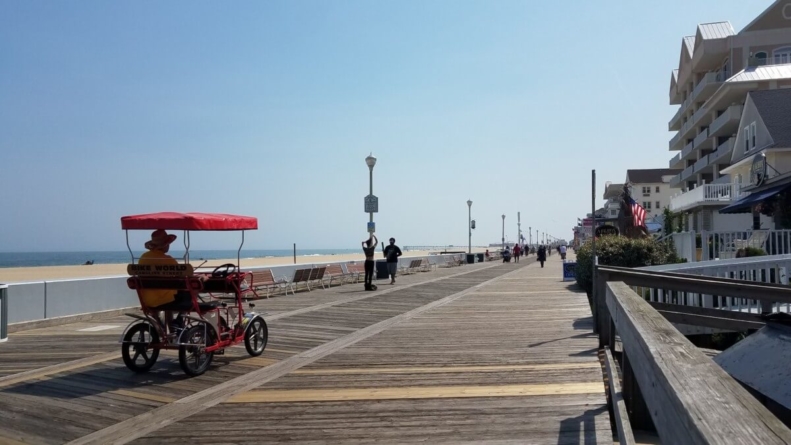 This week’s title, “A Return to the Outdoors,” is inspired by all the events happening outside this week, from Spring Movie Night in the Park to the first Eastern Surfing Association surf contest of the season, along with Berlin’s Reggae Play Day fest and their 2nd Friday outdoor art stroll. When was the last time we had so much to in the fresh, open air? The weather forecast for this weekend is currently looking a little questionable, but if it’s anything like the Springfest weekend we’re now coming out of — a not-too-shabby start to the season! — then we’ll be just fine.

Whale sighting! A humpback whale was caught and then freed on Thursday, May 2, after it was caught in a commercial fishing net near Ocean City. The Salisbury Daily Times reported that three officers, Ocean City firefighters and a “good Samaritan” worked to cut the netting off the 40-foot whale in the waters near 12th Street.

Humpback whale gets caught in net in Ocean City waters, then freed

CLOSE A whale was rescued and freed Thursday evening after it was caught in a commercial fishing net near Ocean City waters, but netting material still remains on the aquatic mammal, according to Maryland Natural Resources Police. National Aquarium officials believe it to be a humpback whale.The whale’s mouth, pectoral fins and possibly its tail were entangled in the gill net.

The OC Bay Hopper is open for the season and ready to take travelers all over Ocean City, from its northernmost reaches into Delaware, all the way down to the Inlet and everywhere in between. The water taxi also moonlights as an activities charter, taking families on crabbing trips and scenic fireworks cruises, and is available for rent, too.

The OC Bay Hopper is an Uber of the ocean, designed to shuttle passengers along Ocean Cityâ€™s back bays from the northernmost reaches of Ocean City all the way down to the Inlet and Assateague Island.

Ocean City was ranked the #7 place in the U.S. to buy a beach house in 2019. We personally think it should be #1, but Vacasa’s rankings were determined by aggregate cap rate — the ratio of a property’s net operating income over its cost. If you’re in the market for a beach rental, consider Ocean City.

Ocean City Named #7 Best Place to Buy a Beach House in the U.S.

According to Vacasa, a Portland, OR-based vacation rental company, Ocean City, Maryland is the #7 best place to buy a beach house in 2019.Â The Top 10 report is based on local markets’ aggregate cap rates, or the ratio of a property’s net operating income over its cost.

This Week in OC

Spring Restaurant Week (til May 11): Come to Ocean City for Restaurant Week and have the opportunity to try new restaurants from fixed price menu options. They may offer a $10, $20, $30, or $40 fixed menu. Dining options range from the clean and simple to fine dining. The chance to try new food or dine at your favorites for a great price is so popular that we highly recommend making a reservation in advance. Don’t miss out on Ocean City Restaurant Week!

Spring Family Movie Night in the Park (May 10): Come join us for a FREE night of family fun! Ocean City Recreation & Parks will show a family appropriate movie at Northside Park on a giant projection screen. The movie will begin shortly after sunset.

Beachfest Volleyball Festival (May 11-12): Come to Ocean City for the fun, competitive indoor volleyball tournament.  This tournament originated in Ocean City with 40 teams and has exploded in popularity over the past three years growing to over 224 teams in 2018.  Expanding to Salisbury and Snow Hill to accommodate the popularity, we try and keep our Ocean City roots in mind by allowing each team to play in Ocean City one of the two days.

Delmarva ESA Surf Contest #1 (May 11): The Eastern Surfing Association is dedicated to the sport of amateur surfing, to the operation of a program of amateur competition for surfers of all ages and abilities, and to the establishment and preservation of free access to a clean shoreline and ocean environment. It was founded in 1967 by East Coast surfers to promote, preserve, and protect the sport of surfing on the East Coast.

Fight the Bite 5k (May 11): Join us on the Boardwalk for the 3rd Annual Fight the Bite 5K Run/Walk. This is a fundraising event providing information and prevention on Lyme Disease while educating the public about the short and long term effects of an illness that is indemic in Worcester County. The Fight the Bite 5K will begin and end on the boardwalk near the Inlet Parking Lot. Registration, stage, and festivities will be set up adjacent to the south west tram station.

The Rat Pack Together Again (May 11): The music that inspired and thrilled an entire generation! This is a fabulous night of music and song. Frank, Dean, and Sammy will be performing with their 8-piece Big Band Swingtopia, singing their great songs and performing their comedy sketches. The Rat Pack Together Again brings these characters to life before your very eyes.

This Week in Berlin

Reggae Play Day (May 10): Come to Berlin and listen and watch a variety of bands perform, including live reggae music from Zion Reggae Band and 9 Mile Roots! There will also be FREE bingo with prizes hosted by Ocean 98’s own Stevie Jay and DJ Magellan, food vendors, and a Beer Garden to complete this great evening.

2nd Friday Art Stroll in Berlin (May 10): Take a stroll through downtown Berlin and check out the town’s featured artists in their local shops and restaurants. Each month is unique, but you’ll always find great art!