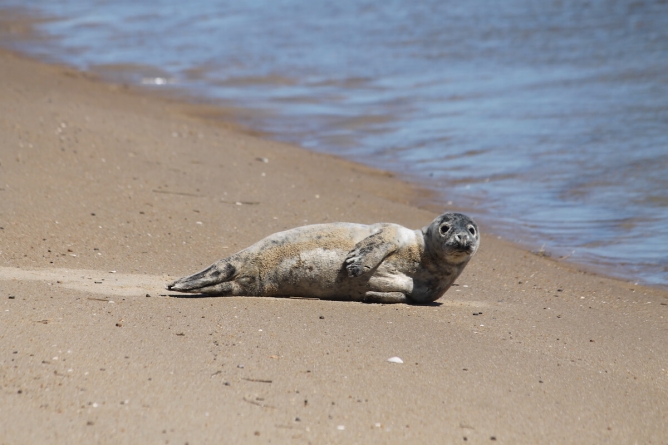 What to do when spotting a seal in Ocean City.

A little seal pup was spotted on the beach on Saturday, reveling in the bright sunshine and oblivious the dozen people standing fifty feet away watching him take a snooze. The seal, described as a young juvenile, spent a good amount of time just lolling on the sand on near 39th Street. It was spotted Saturday morning by a young boy who was on the beach enjoying the sunrise.

“We’ve been coming down to the beach 30 years, and we’ve never seen a seal before,” said Nick Travisano, the boy’s father. “He came in all excited.”
The seal was not as delighted to see the young visitor.
“He said, ‘Dad, he growled! And he showed his seal teeth,” Travisano said. “My son ran one way, and the seal went in the other direction.”
The seal did a fair bit of hopping around in the water in the early hours, but by noon he was settling in for a siesta on the beach. It wouldn’t be bothered, as National Aquarium representatives blocked off a 50-foot area.
Although seals look like cute cuddly creatures, they’re wild animals and can be extremely dangerous. Seals are semi-aquatic, meaning they spend lots of time on land. The three common reasons are to rest, to pup or to molt. Typically, it’s exhaustion that brings these adorable creatures to shore—and if so, stay away! You don’t want to put yourself in the path of a cranky seal. They’ll bite you, and seals can carry several diseases like herpes or rabies.

It also happens to be against the law to disturb their rest, as seals are protected by the Marine Mammal Protection Act. That’s why whenever someone calls in a seal spotting to the Maryland Coastal Bays Program they’ll  sends out a team to keep people at least 50 feet away.
Saturday’s seal pup marks the eighth seal that has gone sunbathing on the Ocean City beach since January.

•If you spot a seal that seems to be just resting, register it with the Maryland Coastal Bays Program at www.mdcoastalbays.org or call 410-213-2297, ext. 106.

Boardwalk Birdie has flown all over, but there's no place she likes better than Ocean City. Some of her favorite spots include Assateague Island, the benches on the boards near Third Street, and Decatur Diner. She loves hearing titterings and tweets from readers, so drop her a line at boardwalkbirdie@gmail.com