If Ocean City officials, residents, and tourists were told in March that the Covid-19 pandemic would have a major impact on the holiday season, very few would have believed it. However, 2020 continues to be a year full of surprises, and town officials are planning ahead to ensure that there are still exciting winter festivities for the public to enjoy. 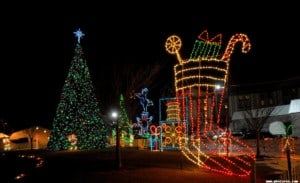 The 28th Annual Winterfest of Lights is slated to run from November 19, 2020, through January 2, 2021. Throughout this lengthy period, over 100,000 visitors usually gather to gaze at the beautiful displays in Northside Park, 125th Street, and the bay. Without a doubt, the event will be scaled back this year due to the pandemic. Nonetheless, it still promises to bring joy to families this holiday season.

Longtime patrons of the event are accustomed to the mile-long ride on the Winterfest Express tram and standing in the large heated tents. However, conversations between the town and local health department revealed that these elements of the event must go for it to move forward in the Covid-19 era.

Special Events Director Frank Miller indicated that many of the health concerns raised by Worcester County for Winterfest are similar to those for the now-canceled Sunfest.

“When we looked at Sunfest and spoke to the local health officer, she mentioned certain conditions that we’d have to adhere to. When we apply those concerns to Winterfest, many of the same worries linger,” Miller explained. “The biggest issues are with the tents and tram rides. So many bodies are stacked and packed into the tent, so it wouldn’t be possible to have it with social distancing guidelines. Additionally, the tram is usually at full capacity, and we use all our available trams. Trying to keep families together, skipping rows, and extending rides would not be realistic.”

While these changes may be disappointing to the general public, they will certainly be welcomed by the budget team. The Ocean City budget is tight due to the recent economic shortfall. A typical Winterfest of Lights costs around $380,000, but with the proposed changes, the event may only cost $250,000. Similar to the costs, revenue is projected to decline. A net gain of $100,000 is expected from the 2020 event, compared to $180,000 in a normal year. 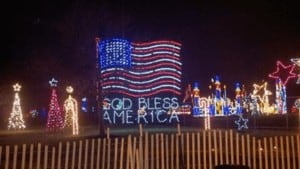 In a year filled with extremely complicated problems, officials are hoping to make the solutions quite simple. This year, patrons will likely walk through Northside Park. Since people will walk, the landscape of the festival will be cut in half. This will give the special events team about half a mile to work with. With the smaller layout, some attractions, such as the 12 Days of Christmas, will not make the cut. Miller plans to dump numerous light presentations, but promises that more trendy ones will remain up and running. He is also looking at lighting up nearly 200 trees across Northside Park, something that has not been done in the past.

For the children who cherish the Winterfest of Lights, there is nothing to worry about. Covid-19 is not keeping Santa Claus away! He will be taking pictures every night through December 23, and the gift shop will be open and offering hot chocolate.

In anticipation of reduced crowd sizes and to save funds, the festival will run five days a week instead of seven.  In previous years, hours have changed on weekends, but they will stay the same each day this year. Visitors can head to Northside park from 5:30 p.m. – 9:30 p.m., Wednesday – Sunday.

“This is not an event we want to lose. There is still value here,” Miller said. He projects that almost 70,000 people will come to see the lights during the holiday season.

Safety remains a priority for the town. Currently, masks are required at all Ocean City special events, per a directive from Mayor Rich Meehan. Governor Larry Hogan only mandates the use of a mask outdoors when social distancing is not possible, but Meehan took an extra step in the interest of public safety. 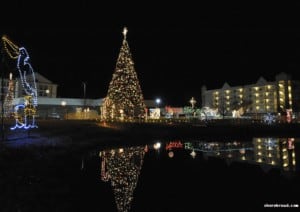 Everyone hopes that the coronavirus pandemic will be even less of a concern by the time the holiday season arrives. Members of the Ocean City Council expressed their desire to see the event move forward. For now, Miller acknowledged that discussions surrounding this event are far more positive than those for Sunfest at this stage of planning. In addition, he believes that the proposed event will be looked upon positively by the general public and media. “If you come to Northside Park, you’ll find that it will be great. The conversations we are having are much better than with Sunfest. People have a sense of security with outdoor events,” Miller said.

During the September 29 council work session, Miller estimated that the town would suffer a net loss of $156,000 if the event were canceled, but only $100,000 if it moves forward in a modified way.

The council voted 5-2 to approve the modifications presented by Miller. Councilmembers Dennis Dare and Matt James opposed the modifications, but made clear that they do not oppose the event itself. Dare voiced his concerns about young children wandering the park at night, especially since there are so many chords to light up the displays. He also discussed how strolling through Northside Park in the winter weather might be uncomfortable, saying it might be the coldest place on the Eastern Shore. He proposed an alternative event in which the entire town could be decorated and people could drive several miles to view the lights.

James’ concerns stem from lower attendance due to the loss of the tram. Prior to his remarks, Miller already conceded that a loss in attendance is expected, but that tens of thousands of people are still estimated to visit over the 45-day period. James said that plexiglass should be installed on the tram, pointing to the fact that people like to bundle up and enjoy the ride across Northside Park. He asked if the local health department has restricted the use of the tram. Miller responded that while it is not officially restricted, trying to operate it during the Covid-19 era would be quite difficult. James added that the long walk through the park will be more like a workout than an enjoyable special event.

Miller is using another recent event as a guide for the Wintefest of Lights. He is touting  the successes of ArtX, which was held at Northside Park in late August. Over two days, approximately 4,000 people strolled through the park, purchased items from vendors, or even took an art class. Miller said that this proves how eager people are for a sense of normalcy.

No matter the case, the Baby Boomer generation is one of the most reliable audiences across the country. This is usually no different with Ocean City events, but the pandemic has kept many older patrons at home.

“We have seen a drop-off in our Baby Boomer audience this year. We hope that they come back for this event,” Miller said. “At the same time, we know that this festival attracts a wider audience, and brings in extended families. This festival is part of many people’s annual holiday traditions.”

Stay tuned for more updates about the Winterfest of Lights.