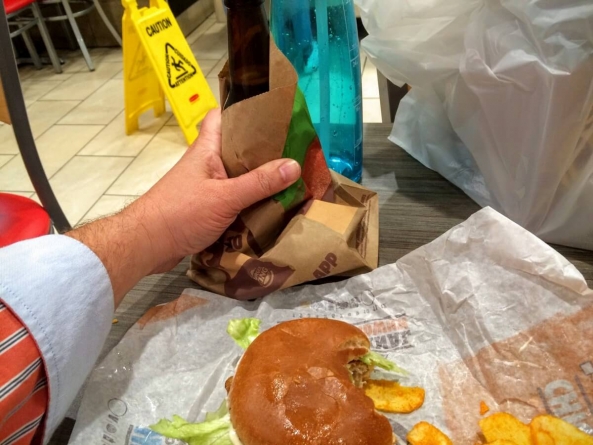 It’s important to start out saying that I’m one of those obnoxious localvore wannabes. I get my meat from a farm near my home and many of my vegetables the same way. The relevant point, though, is that I avoid chain restaurants at all costs, mostly. This week I had to make an exception and if the experience was awful, you know I’d mention it, but it wasn’t awful, so credit where it is due.

After a long, vaguely involved series of events (which we discus on the podcast) I found myself at a Burger King in Ocean City with a six pack of beer and a bag of potato chips. This was my second trip to a Burger King this century, so I kept my expectations low and ordered a fish sandwich, grease being the ally of the inebriated. The folks were enthusiastically friendly and involved themselves in my meal happiness well beyond what my appearance required. I looked like a drunk Ocean City dude.

I squirreled myself away in the corner, popped open one of the craft beers I bought and figured I’d take my chances on getting caught. The kids running the place apparently thought I’d left and must have said something inappropriate, because they noticed me and apologized. I told them the following (or something similar):

“I’m drinking a beer from a bag in a Burger King on a Saturday night, I’m not  likely to complain about anything.”

I finished off my beer, sandwich and chips, thanked them again and made my way out so they didn’t feel as if they had to comment on the whole beer thing.

In this week’s show we talk about the differences between in-season Ocean City and off-season Ocean City, covering some of the events that have passed and previewing others that are coming up. Including, and especially, Thanksgiving, Winterfest, and what it is like to be a seasonal employee in a year-round resort.

You can subscribe to the podcast on iTunes or Android or listen here. If you would like to be a guest, reach out to be in the social box below.