(Dec. 7, 2012) Station 7 Restaurant opened last Thursday on Route 707 in West Ocean City to the anticipation of many as a number of patrons stopped by Nov. 29, that first night of business, and since then the establishment has seen good crowds.
“It’s been going well. We’ve been pretty busy,” said owner Todd Wampler, who noted that a number of customers have visited multiple times since opening day. “Opening weekend went smoothly. The bar area has been packed since we opened.”
Station 7 operates in the building formerly home to 707 Sports Bar & Grill, which closed last December.
Wampler, who has partnered with Ben Cooper, Mark Sens and Rob “Doc” DuVall in the business venture, took over the space Feb. 1. Renovations began immediately.
Bricks and crown molding accent the top portion of the walls, which are covered in dark wood. The dining room seats about 90 guests, while the bar area can accommodate approximately 40 patrons.
The “bone bar,” a counter in the shape of a dog bone where seating is available, acts as a divider between the dining room and bar area.
More than a dozen televisions have been mounted throughout the restaurant, and there is a 10-foot screen that can be pulled down as needed. Blue and red neon LED lights accent the room. Above the bar are lighting fixtures custom made with pieces of scrap metal by Luke Bavas of Creative Metal Works.
Wampler said the reaction from customers has been “amazement of how different the place looks.”
The theme of the West Ocean City location is the same as Wampler’s other two Station 7 restaurants: an homage to fire companies. The first Station 7 opened in December 2006 in the old Pittsville firehouse, originally built in 1929. The second restaurant opened in Laurel, Del., in May 2010.
Jackets and helmets donated by a number of regional fire companies and miniature fire trucks, as well as photographs of firefighters at work, are displayed throughout the new 4,000-square-foot restaurant. The bar tap is a fire hydrant.
The menu at all three locations is similar, except the West Ocean City establishment’s is a bit broader, with a few additional options.
Wampler describes the menu as “American fare,” with an emphasis on barbecue, ribs and brisket.
“We’re a high-class dive. We’re a neighborhood bar and grill,” he said. “The Pittsville restaurant is more food oriented and a destination spot because people want to check out a restaurant in an old firehouse, and at the Station 7 in Laurel, the focus is on live entertainment and music… Here, we’re going for a Cheers-like atmosphere.”
Wampler said he always wanted to open a Station 7 Restaurant near Ocean City.
“I wanted to get closer to the beach and West Ocean City is a growing area,” he said. “I like this old building. That’s kind of what drew me to it.”
The West Ocean City Station 7 is open daily from 11 a.m. to 2 a.m. After the first of the year, Sunday brunch will be available beginning at 9 a.m. The restaurant features a $7.77 lunch menu, 11 a.m. to 4 p.m. during the week. Happy hour is offered Monday through Friday, 4-7 p.m., and all day Saturday. Nightly specials are also available. One of the main staples is smoked prime rib on Friday evenings. There is parking behind the restaurant. 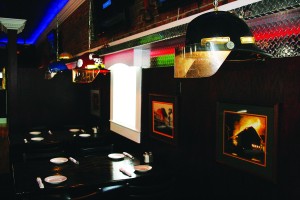 Jackets and helmets donated by a number of regional fire companies as well as miniature fire trucks are displayed throughout Station 7 Restaurant in West Ocean City. These helmets have been converted into lights. 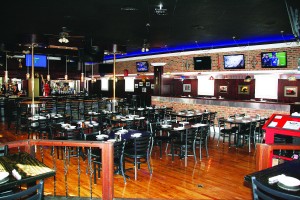 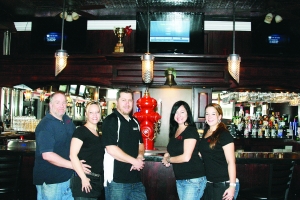