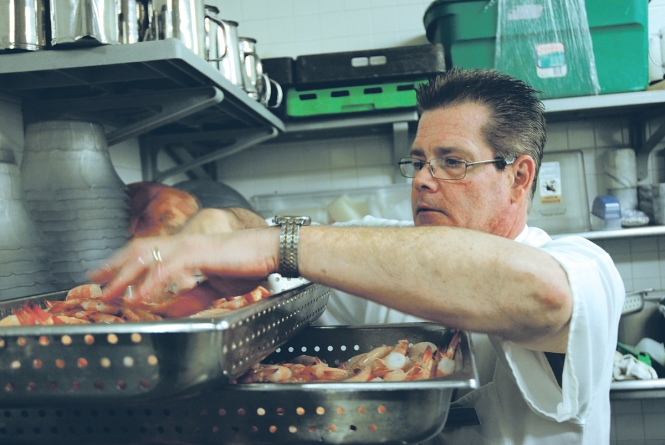 (Oct. 17, 2014) Diners have a reason to eat, drink and be merry as Ocean City’s fall Restaurant Week is in full swing.

The specials continue through Sunday, Oct. 26 with fixed-prices menus of $10, $20, $30 or $40 at more than 20 restaurants around town. New this year, Restaurant Week will also dish up good deals and specials on already-low shoulder season prices.

“We already have a lot of restaurants that give great offseason deals,” said Susan Jones, executive director of the Ocean City Hotel-Motel-Restaurant Association, which organizes the annual event. “We thought we would just combine the two for fall Restaurant Week.”

The two-week special is designed to draw diners through the doors when business slows, but it also gives chefs a chance to create a unique menu.

“We just try and design the Restaurant Week menu around the seasons, trying to utilize the fall flavors,” said Jim Glenn, executive chef at Horizons Oceanfront Restaurant, inside the Clarion Resort Fontainebleau Hotel on 101st Street.

Horizon’s special dinner menu includes a choice of starters such as pumpkin soup, made with sage and apples, or an autumn salad of candied pecans, bleu cheese, dried cranberries and honey champagne vinaigrette poured over a bed of roasted sweet potatoes.

Desserts will be a selection of cakes from Desserts by Rita, including a pumpkin lust cake that combines pie, meringue and fall flavors.

“Every year we create new things to utilize what’s in season,” Glenn said. “It’s always ‘wipe the slate clean and start over fresh,’ and we’ll always do that to keep our customers interested.”

“It’s always fun (designing the Restaurant Week menu),” he added. “We like to be creative and do things out of the ordinary.”

Horizons will be dishing up its specials — two courses for $30 or three for $35 — for dinner all week and will offer other daily specials such as “Lobster Lunacy” on Thursday and 20 percent off wine all week.

Restaurant Week newcomer Touch of Italy hopes the event will do the same on 66th Street.

“We are new and knew it was an opportunity to get our word out, to have people come in and check out what we have to offer,” said Touch of Italy Chef Shawn West.

His Restaurant Week menu features “some of our favorite things — things that we’d like to point out to people. A lot of times people come to an Italian place and they think, ‘I’ve got to order the chicken Parmesan,’” he said.

Touch of Italy will also serve its ‘Pollo al Taleggio,’ a chicken cutlet breaded in homemade crumbs, pan-seared in a white wine Italian herb sauce and topped with melted taleggio cheese and prosciutto di parma, served over a bed of sautéed spinach.

Touch of Italy’s special menu, which comes with a starter, pasta dish, meat dish and dessert, will be available on weekdays only.

Jones brought the idea for Restaurant Week back from a travel summit on the western shore in 2007, she said.

“We brought the idea back to our board and they loved it,” she said. “It’s just great deals on great food.”

Alcohol, tax and gratuity are not included in Restaurant Week’s fixed menu prices. Participating restaurants will still have their regular, full-price menus available during the special.

BJ’s on the Water, 75th Street

Captain’s Table, 15th Street, in the Courtyard by Marriott

DaVinci’s By the Sea, 15th Street on the Boardwalk

Hemmingway’s at The Coral Reef, 17th Street, in the Holiday Inn & Suites

The Hobbit Restaurant, 81st Street, in the Rivendell Condos

The Shark on the Harbor, Sunset Avenue, West Ocean City