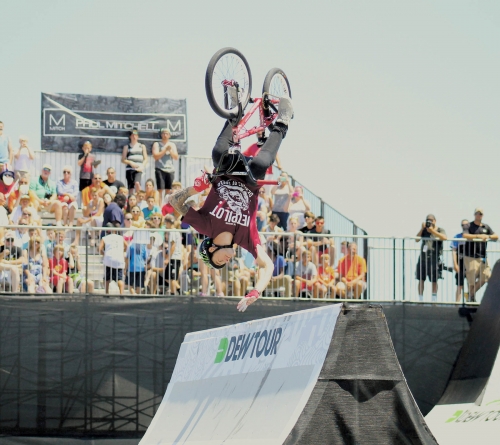 (Jan. 2, 2015) From a record-breaking Dew Tour event in Ocean City to standout Berlin Little League baseball teams, here are some of the top sports stories for 2014:

The Dew Tour saw another record-breaking year in Ocean City as an estimated 105,000 guests visited the Beach Championships, June 25-29.

Added Alli Sports President, Eric Grilly, “We could not have asked for a better event than this year’s Dew Tour Beach Championships. From the kick-off with Ocean City Mayor Richard W. Meehan to setting a new record with 105,000 people experiencing the Dew Tour, the hospitality and enthusiasm of Ocean City truly helped make the event a success.”

This was the fourth year Dew Tour hosted competitions in the resort.

During its Ocean City debut in 2011, the Pantech Open set a Dew Tour attendance record by drawing approximately 73,000 fans during its four-day run in the resort, July 21-24–its first beachfront venue. That record was broken in 2012 as an estimated 93,000 spectators came out to the beach for the Dew Tour Pantech Beach Championships, Aug. 16-19.

The Dew Tour, with its world-class athletes, returned to Ocean City for the third year in 2013, and again, a new attendance record was set. Over the course of five days, June 19-23, an estimated 103,000 fans attended the Dew Tour Beach Championships.

This year, the 2013 record was slightly edged out for the Dew Tour’s 10th anniversary season.

About 10 days before competitions began, workers started erecting a vertical ramp, skateboard bowl and a BMX park, along with the rest of the venue that would contain the “Dew Tour Experience” booths, activities and concert stage just north of the pier in downtown Ocean City.

In addition to the competitions, the Dew Tour featured free, live concerts on the beach.

Admission was free for all competitions and concerts, although Dew Tour fans had the opportunity to upgrade their experience as a limited number of premium passes were available.

Two championship Berlin Little League teams received a hero’s welcome on Oct. 10, celebrated with a parade through the town.

Berlin honored the Intermediate All Stars, the United States runner-up in this year’s Little League World Series in Livermore, Calif., and the 9-10 All-Star squad, who won a state championship and played in the regional tournament in Cranston, R.I.

The 9-10 All-Star team dominated its age group in local competition, winning six straight games by a collective score of 81-6.

The team won the District 8 championship and outscored opponents by 40 runs at the state level, claiming the 2014 Maryland championship.

“This group of young men truly represented Berlin Little League with class and sportsmanship,” he said. “They have a bright future on and off the field.”

For the first time in town history, the team won the East Regional championship in 2014. They went on to finish second in the U.S. in the Little League World Series in Livermore, Calif.

Coach Cameron McDonough said his players were, “brothers for life.”

“You are family,” he said. “This town, this county and this area has really wrapped their arms around all of us and supported us through all of this. We had the most amazing time you can ever imagine.”

After doing some research, Coach Todd Martinek said Decatur had never had a freshman Bayside champion before.

“To have two, that’s a promising future. And, they were so dominant,” Martinek said. “It’s awesome to see those freshmen and their parents, how happy they were.”

Kaminski finished his first season with a 31-11 record. He placed fourth at regionals. Kaminski also competed in the state meet. He lost his first match 6-1, but won his second 5-0. He was pinned in his third match.

Both grapplers are competing as sophomores this season for Decatur.

The Seahawks placed ninth overall (eighth in 3A/4A) in the state championship.

“Coach [Don] Furbay and I couldn’t have scripted [the season] any better. We had five of the most enjoyable young people to spend time with. Each one of them brought a unique personality trait to the team,” Coach Jim Krall said. “The chemistry was wonderful and truly rewarding to witness all season.”

Parker, who missed the first five matches because of a broken wrist, was the top golfer in the Bayside with a 38.43 average and was co-champion in the District VIII tournament. He was also named Conference Player of the Year.

Kristick was close behind Parker with a 38.75 average. Finishing just .32 strokes behind Parker, Kristick was ranked the No. 2 player in the conference. Kristick tied for 31st during the state match with Parker.

Holloway ranked fifth in the conference with a 40.25 average. He was the Bayside championship co-medalist. Holloway made it to the final round of the state tournament where he tied for 69th.

Iacona was the No. 1 female golfer in the conference and finished ranked seventh overall in the Bayside South (41.67 average), which includes male golfers. She was the District VIII female champion, earned co-medalist in the Bayside championship and made it to the final round of the state tournament where she finished 14th among all the girls (44) in the state.

Kinsey had a stellar freshman season. He was ranked ninth overall in the Bayside South with a 41.83 average.

Krall was named Coach of the Year.

“The season overall went amazing. I don’t think it could have gone any better,” Berke said.

Berke was the head coach of Decatur’s girls’ JV team last year. At the end of her team’s season, she assisted Coach Misty Bunting with the varsity squad during its playoff run. Having the opportunity to work with the girls and getting to know them was beneficial coming into this season.

Berke knew she inherited a talented team, but she said she wasn’t sure how well the new coaching staff and players would mesh. Berke was pleasantly surprised.

After going 11-0-1 during the 2014 regular season, the Lady Seahawks earned a spot in the Bayside Conference championship game as the top Bayside South team.

Senior Jillian Petito scored four goals on her 17th birthday – the last was the game-winner in overtime – to bring the Bayside Conference championship title back to the school after 11 years.

The Seahawks edged out the Queen Anne’s Lions 5-4.

The last time Decatur competed for and won a Bayside title was in 2003 under the direction of Coach Amy Fenzel-Mergott.

Decatur’s season came to an end Oct. 30 with a 3-1 loss to the Northern Patriots of Calvert County in the 3A South Region Section I finals.

Stephen Decatur senior Jillian Petito was thrilled to learn on Nov. 10 that she was chosen as Maryland’s female winner in the Wendy’s High School Heisman Award competition.

“It is such a huge honor, it really left me speechless once I found out,” Petito said. “I was completely stunned and in disbelief when they told me.”

Each year, thousands of students from across the country apply for the award. Students are judged on their academic achievements, community service, leadership and athletic accomplishments.

The finalist group was then cut to 102 winners (one male and female from each state and the District of Columbia). The state winners each earn a silver medal, Heisman patch and $50 Wendy’s gift card.

Of the 10 Maryland female finalists, Petito was named the state winner.

Unfortunately, Petito was not chosen as a national finalist.

“I’m definitely more than pleased of how far I made it,” Petito said. “It’s amazing that I was able to make it that far and it’s really such an honor. I’m so thankful to be recognized as a state winner and could not be happier.”

Petito wrapped up her fourth soccer season competing for Decatur in October. A team captain, she led the Lady Seahawks with 26 goals and 12 assists.

Petito is currently in her fourth season playing basketball for Decatur. Her final lacrosse season at the Berlin school will begin in March.

Petito has committed to play Division I lacrosse for Mount St. Mary’s University.