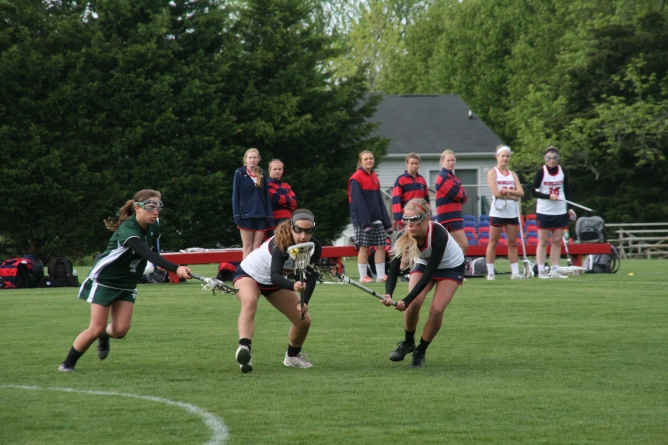 “We knew that it was going to be a really tough game, that Sts. Peter & Paul was going to come out wanting to beat us after we beat them 9-8 earlier in the season,” said Prep Coach Allie Gamble.

At the halftime break, Worcester led 10-7. The Mallards maintained an advantage throughout the second half, but the Sabres started to chip away at the lead. The home team evened the score 15-15 with 21 seconds remaining to force overtime.

“We forced the ball a couple times, which is what let them come back. We were up four goals with six minutes left,” Gamble said.

Seniors Kristen Shriver and Alie Greer, a team captain, scored for the Mallards in the first three-minute extra period. The Prep team possessed the ball and killed the clock in the second overtime.

Earning the No. 1 seed in the ESIAC tournament, the Prep team hosted the No. 4 Salisbury School Dragons Wednesday for semifinals action. Worcester outscored Salisbury 13-2 in the first half. The Mallards won the game, 19-3.

Pilchard started the game and was only challenged once. Junior Carolyn Dorey stopped three Salisbury shots.

Worcester (14-0) will battle Sts. Peter & Paul for the third time this season at 4 p.m. today, Friday, in Berlin in the ESIAC title game.

The Mallards captured the trophy in 2013 with a 20-5 victory over the Sabres in the championship match.

“It’s a huge game. I think there’s just a few things we have to tweak and hopefully we’ll be ready,” Gamble said Wednesday. “I feel like they know us really well by now, but we know them really well, too…Our defense played really strong [Tuesday] and if we play strong on Friday we’ll be fine. We’ve just got to put the ball in the back of the net.”