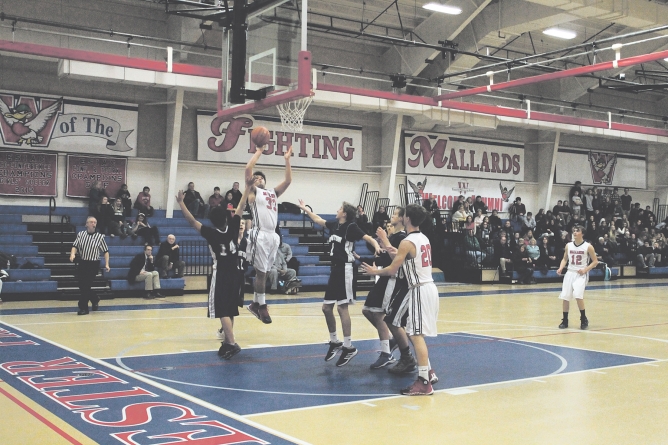 (Jan. 23, 2015) The Worcester Prep boys’ basketball team got off to a slow start last Friday in Berlin against the Gunston Day Herons, according to Coach Keith Geiger, but from the second quarter on, he thought the Mallards played well.

Scoring went back and forth in the first quarter. Tied 7-7 with seconds remaining, junior Elio Telo made a lay-up to give the Mallards a 9-7 lead.

Worcester tacked on 25 points in the second quarter and held Gunston to six points to go into the halftime break on top, 34-13.

The home team added 12 points in the third quarter and held the Herons scoreless.

“We got good looks when we patiently ran the offense and we pushed the ball when it was appropriate to do so,” Geiger said. “It was nice that everyone had a chance to play.”

Telo had a good game, Geiger said. He finished with 13 points and seven rebounds and only played in about half of the contest. Junior captain Wyatt Richins chipped in with 13 points.

Worcester Prep students had semester exams this week. Next week they are off for winter break.

“We are only going to have a few practices over the next two weeks. Most of the players are going away for the winter break, and we can’t practice much during exams,” Geiger said. “Then when we return, we play four very difficult conference games in two weeks.”

School reopens on Monday, Feb. 2. The Mallards will have two days of practice before they travel to Georgetown, Del. to play the Delmarva Christian Royals. Two days later, they will battle the Salisbury Christian Jaguars on the road. The following week, Worcester is scheduled to face the Salisbury School Dragons, Feb. 11, in Berlin and the Holly Grove Eagles in Westover, Feb. 13.

“It’s going to be tough, but I think we can win the conference and secure home court for the playoffs. We’ve played everyone in the conference once and only lost to Salisbury School, so we are definitely capable of winning the rest of the games,” Geiger said. “We need to do the fundamental things well – making lay-ups, making foul shots, getting out and running in transition. If we keep getting better at those basic things, we can win.”

The Eastern Shore Independent Athletic Conference tournament is set to being with semifinal action on Wednesday, Feb. 18.