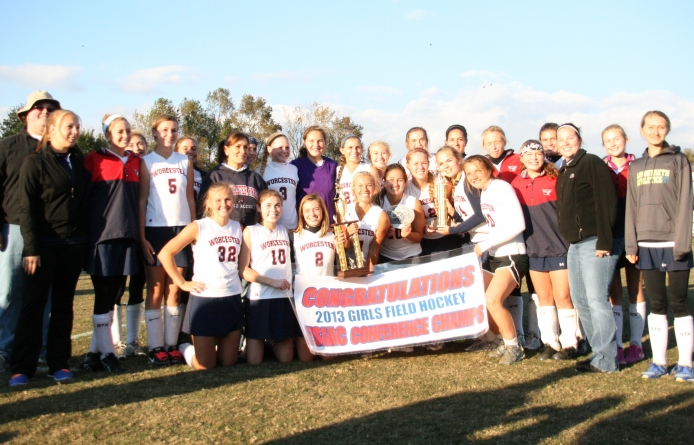 The two squads went head-to-head for the Eastern Shore Independent Athletic Conference championship trophy last Friday on the Mallards’ field in Berlin and the home team didn’t have as easy of a time earning a victory over the Sabres. But in the end, the Prep squad pulled out a 2-0 shutout to capture the ESIAC title for the second consecutive year.

“Sts. Peter & Paul definitely came to play and we had anticipated that,” said Mallards’ Coach Jenny Frostrom. “They were playing extremely tight defense. Our top scorers were heavily marked.”

Worcester maintained possession in their offensive end for a majority of the second half. The Mallards fought to get a goal and their efforts finally paid off. Senior captain Sarah Arrington saw senior Hannah Esham and junior Caroline Lindsay loosely marked in front of the Sts. Peter & Paul goal and that’s where she hit the ball.

“I saw they were there. I just waited for the perfect moment and hoped they got it in,” Arrington said.

Esham scored with 8:37 left in the contest.

“I knew we needed to get a goal in and it needed to be done quick. We had a perfect pass from Sarah Arrington and I just saw the ball come across the line and I sent it in,” Esham said. “It was so great to have that feeling and to know that we were on top. It set a whole new momentum for the game. It was the confidence we needed to get the next goal.”

At the 7:04 mark, junior Jordie Loomis blasted a shot past the Sabres’ goalie to give Worcester a two-goal cushion.

Following the game, the championship trophy was presented to Worcester.

“My senior year, there’s nothing more I’d want. It was just the best feeling to finish up with a win,” Esham said.

Added Arrington, “We just played our hearts out. It was the best possible way to end high school field hockey. I couldn’t have asked for anything better.”

Frostrom said it was “extremely exciting” for her team to win the ESIAC title–only the second in the field hockey program’s history.

“They really played well together. They wanted it,” she said.

The Mallards went 12-0 during the regular season. They shut out the Gunston Day Herons 5-0 in the ESIAC semifinals on Oct. 23, to advance to the championship match.

“The championship is great, but our season has been phenomenal. To have an undefeated season is history for Worcester Prep,” Frostrom said. “We have just had an excellent group of seniors and starters and they just know how to work well together and it’s made for an unstoppable force this year. I’m certainly going to miss [the seniors.]”

Seven seniors will graduate in May. They all started and were key contributors.

“You can’t even pick them apart. They’re equally valuable,” Frostrom said. “There are big shoes to fill for the girls next year.”

“I was so surprised,” Arrington said. “It’s just an amazing feeling. I never imagined that I would be honored with this.”

Despite losing seven starters, a core group of veterans will return in 2014.