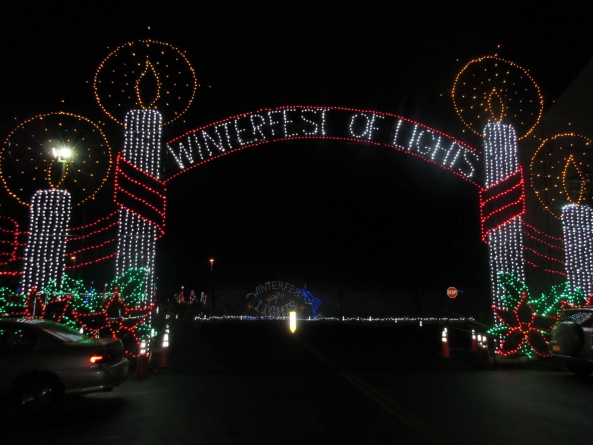 (Jan. 9, 2015) The only thing broken at this past year’s Winterfest of Lights was the attendance record, with city records showing that 111,042 passengers took a ride through illuminated Northside Park during the 46-night holiday spectacular.

“We were up 18 percent from last year and broke all records this year. The only number that decreased was the number of tram cars used, which means we moved more people over a longer period of time,” said Frank Miller, Ocean City’s special events superintendent. “This year exceeded our expectations and I am happy the thousands of dollars made off this event will go towards the city’s needs.”

The 127th Street display includes a 12-minute tram ride with holiday music, through 58 acres of more than 400 displays and one million lights. According to Miller’s figures, an average 2,414 people rode the train through the park each night from Nov. 20 through Jan. 4.

Altogether, 19,294 more passengers who took the mile long train ride this year than did in 2013, when the Winterfest of Lights was four days shorter.

“Weather played a major role in ridership and our biggest spike of people were in the first couple weeks,” Miller said. “There were a lot of variables, including the tourism, marketing and public affairs departments of Ocean City getting the word out. A huge help is the continued good reviews and word of mouth from attendees.”

Miller went on to explain how Winterfest of Lights has a base of attendees who come back every year to celebrate the holiday tradition with their families.

Rain and wind limited the number of passengers riding the Winterfest Express on the final weekend. Saturday, Jan. 3 started off strong, but the Ravens and Steelers playoff game killed numbers later on in the night.

The biggest night overall was Saturday, Nov. 29, when 7,799 people road the tram. The second largest attendance night was Saturday, Dec. 13, when 7,156 riders took in the displays.

For the third year, there was a fireworks display at midnight on New Year’s Eve. It was well attended with 4,000 people riding the Winterfest Express and an estimated 5,000 people coming out to join in the festivities.

“This is an event we are most likely going to have annually. This year started to feel like a celebration instead of a holiday experience, which is what we would like the transition to be for New Year’s Eve at Winterfest every year. The music on the tram will even be different for the New Year’s Eve ride,” Miller said.

Winterfest of Lights has a different layout each year to keep excursions fresh for returning visitors. Riders have the challenge to find their favorite displays in new locations. The city’s crew began setup in early October to transform the park into a winter wonderland.

The Winterfest of Lights has won many awards and received an abundance of accolades throughout its 22 years. The American Bus Association named Winterfest of Lights one of the Top 100 Events in North America for 2014, an honor it also earned in 2013 and 2011. Maryland Life Magazine has voted it “Maryland’s Finest Holiday Tradition.”

The attraction was ranked No. 1 in 2008 on the Professional Travel Guide Editor’s Top 10 of the nation’s largest and best holiday lights displays. Winterfest of Lights was No. 2 in the country on “America Online City Guide’s Top 11 Lighting Displays.” It followed Disney-MGM Studios display in Orlando.