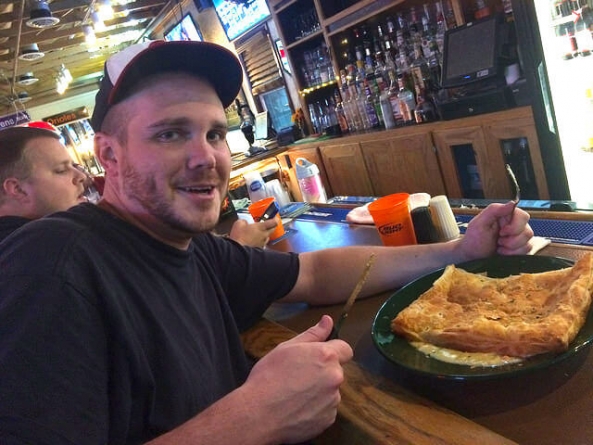 Here’s something many of you don’t know: Tuesday is half-price chicken night at the 28th Street Pit & Pub and you can get a pot pie the size of your head. That isn’t really what this story is going to be about, but it is important that you know about the huge chicken pot pies because as you sit at the bar during this particular Ocean City Happy Hour and they all start coming out, you get the sinking suspicion you’re missing something.
For instance, I was content to have a beer and some onion rings. One of the bad habits I’ve developed and hope to escape from by writing this Happy Hour column, is deciding what I want before I leave the office. I’m a big guy and in my quest to get smaller, I try and save up my calories for my Tuesday Happy Hour Adventure and end up creating a minor food fantasy on my way out. This Tuesday I was fantasizing about onion rings.
I sat down, ordered a FoDo Spiced Harvest Ale and Onion Rings and struck up a conversation with the old guy in the corner.

Roy Gobble has been living in Ocean City for more than 20 years. He came down to work in one restaurant and ended up making a career it. N.Y. Giant hat aside, he is from Pennsylvania and the story about his Ocean City life has a fringe-y feel. But then again, whose doesn’t?
The number of people who come to Ocean City temporarily and decide to stay on through the winter on a whim nearly is without measure. Certainly it happens with hundreds of people each year. For people like Roy, who can find a sweet spot working in the restaurants, there certainly are worse ways to get by.
Although he is the oldest year-rounder at the bar, he isn’t the only one. As we chat people continue to find their way in. They are Tuesday night regulars here for the chicken. By then my onion rings had arrived and I realized I missed my chicken opportunity. I went to meet the Krauses.

Corine, Jamie and Monty Kraus also are year round Ocean City residents, but of a different stripe from Roy. Without getting too precious about it, they are kind of like flowers or munchkins peeking out after a storm. They don’t live far away but give the distinct impression that they are among those who weather the summer on their own, watching the downtown chaos from afar and making a list of all the things they’re going to do when they have the town to themselves. Then, they do them.
Monty said that they try to only eat in local restaurants throughout the winter. The deals are amazing, he said, but even more important is supporting the local businesses in the off-season. It is a kind of pleasurable duty, to hear him tell it. Certainly there is a German word that means pleasurable duty.

Steve Smith works at the Sandbar on the weekends (that’s when it is open). During the week he has a lot of time to kill and lives on a bit of a budget. His was the first Chicken Pot Pie I saw. The meal really is more football sized than head sized, and the pastry is inflated by the heat. I watched as he mashed it down and let it cool a bit before digging in.
Other Sandbar employees began filing in for their own chicken dinners. All of the local places run daily food specials and people tend to bar hop from day to day, rather than from hour to hour. For this group, Tuesday clearly is chicken day. Bartender Jen Witowski called them out by name and confirmed or correctly guessed each of their orders.
The Spiced Ale didn’t really complement the onion rings, so a grabbed a Fin City IPA and finished my snack watching all the time as various chicken-based meals hit the bar. I’ve got to remember to do more research on Tuesdays.