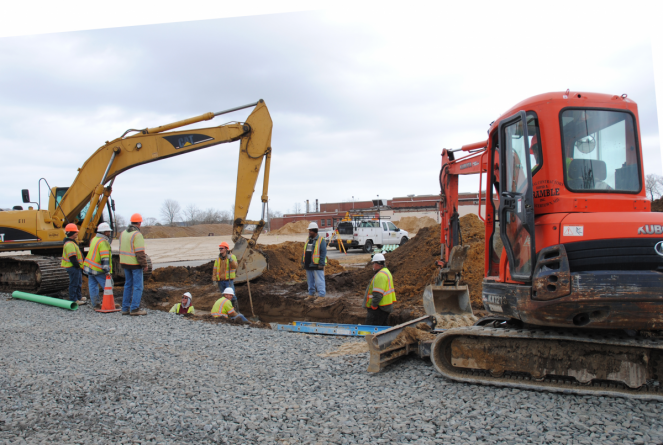 (March 21, 2014) A month after the groundbreaking for the Snow Hill High School renovation and addition project Feb. 18, the facilities manager for Worcester’s public schools announced project delays to the Board of Education at its Tuesday meeting.

Rogue weather and unexpected power lines running through the construction field stymied progress over the past month, but the project should still be on track to end before the start of  the 2016-2017 school year, Joe Price said.

Workers with Oak Contracting found the first mis-mapped power line in early February, when they were digging the storm water management pond, he said.

“The line went right through that,” Price said, but the crews stopped work before “learning the hard way,” running through the lines.

Within a week, workers found their second unexpected line running under the soon-to-be foundation of the new gymnasium. Delmarva Power workers set to work splicing the lines in a L-shape, allowing them to circumnavigate construction while keeping power flowing to the school, Price said.

In all, the project set construction back about five or six weeks — a relatively lucky break, he said.

“Its not just a matter of picking up a line and moving it,” he said. “It probably could have been a four-month process to get all this stuff done, but they got it done very quickly. Their engineers have been fantastic.”

Such holdups are not unusual when it comes to large-scale construction, Price said, and “if we’re going to have a five or six week delay, we want it now,” early in the process.

The Snow Hill project has been on the books since 2002, when planning got underway for the four-phase endeavor.

So far, construction crews have completed demolition to make way for the new additions. Where passersby now see a dirt field, there will eventually be a gymnasium, student entrance and parking lot, mechanical room, locker rooms and band and chorus rooms.

The project will double the size of the school to 121,000 square feet, eliminating the need for portable classrooms. It will also add state-of-the-art classrooms, a new media center, computer labs, a science wing, a cafeteria and a kitchen.

The storm water management pond on the construction site is already finished and workers are digging approximately 300 geothermal wells out back, which will contribute to Snow Hill’s energy-saving design. The school will have motion-activated lights, thermally insulated glass and low-flow plumbing fixtures.

With so much time left before the start of the 2016-2017 school year — the goal end date of the project — Price believes crews can compensate for the five-week loss.

“We still have phase two, three and four all the way through summer of 2016 to pick up more time,” he said. “I’m expecting with the contractors that we have on this job, they’re going to get ahead of what we’ve given them on this schedule.”

The second power line splice should be complete on March 28, making way for foundations on the now empty field, he said.

“After that, you’ll start to see the walls come up and people will start to say, ‘Hey, this is progress,’” he said.

Given the upset at the school, which remains functioning alongside the construction, Price and others at Oak Contracting plan to attend Snow Hill High School’s faculty meeting in June to express their appreciation to school staff.

“They have been very cooperative, very flexible — the teachers, the staff and the students,” Price said. “They’ve taken everything in stride.”