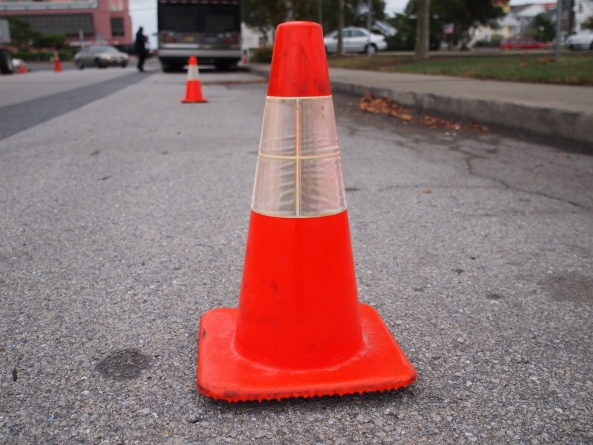 But possibly not until June, as weather delays have continued to extend a particularly arduous construction season in the resort to its very limit.

“We are literally going to be right up until Memorial Day or the week before,” said Charlie Gischlar of the State Highway Administration.

The SHA is currently pushing to have 25 median gap locations, mostly in the midtown area, closed up for the summer season. As part of the agency’s ongoing safety improvements to Coastal Highway, it is sealing up the mid-block median crossings that were incorporated when the road was renovated decades ago.

The crossings were intended for pedestrians hauling beach equipment, and were protected from errant traffic by large, wooden posts known as bollards. But as traffic on the highway has intensified, the crossings have become counter-productive.

“We’re closing them off and trying to encourage people to use the signalized intersections,” Gischlar said.

Given the wet weather and the smorgasbord of other construction to work around, the SHA is working later than expected. But after Memorial Day, the Town of Ocean City limits construction.

“Obviously there are very significant work restrictions once you get beyond that point,” Gischlar said. “We still may have a little work on them that extends into June, but by that point we would only be allowed to occupy the leftmost lane from 9 a.m. to 3 p.m. You have to avoid getting into the post-5 p.m. dinner timeframe.”

However, the SHA’s cordoning off of the left lane for workers rebuilding the median has likely caused less traffic issues than Delmarva Power and Light’s replacement of transmission poles and lines between 41st and 85th Streets, which has occupied the two right lanes on the northbound side of Coastal Highway for most of the winter.

That work is winding down and was slated to be done this week.

“Installation of the poles and the wire-work is done,” DP&L spokesman Matt Likovich said. “We’re just finishing patching up the curbs and sidewalks.”

Elsewhere, the city plans to wrap up the reconstruction of St. Louis Avenue between Third and Tenth Streets possibly by the end of the coming week, Public Works Director Hal Adkins said.

This winter was the second phase of renovations on St. Louis, with the third and final stretch on the lower portion of the street slated for next off-season.

The SHA was also planning on building additional sidewalk bump-outs for pedestrian crossing on Baltimore Avenue this year, but will be putting the project off due to weather and time constraints.

“It’s one thing to push the envelope on the northern end of town, but so many things happen around the inlet and downtown in April and May that we really didn’t want to get into that this year,” Gischlar said. “The town asked us to wait until the fall, and we are.”