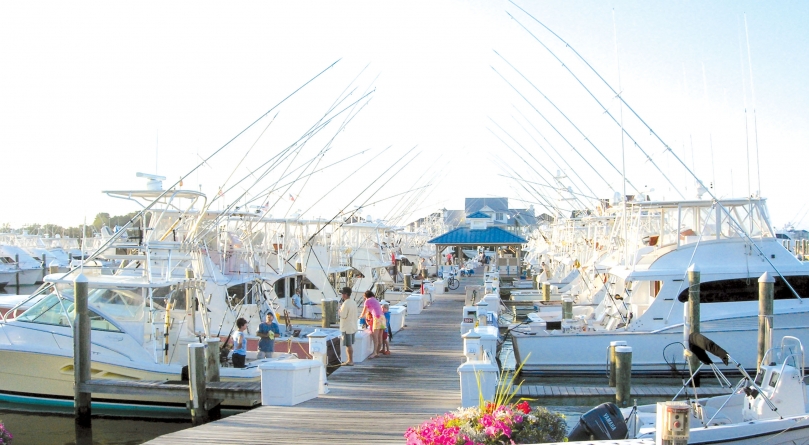 (Aug. 2, 2013) Fishing enthusiasts and spectators are expected to arrive by the thousands to Harbour Island Marina on 14th Street for the daily weigh-ins of the 40th annual White Marlin Open, scheduled Aug. 5-9.

The crowd of spectators converging for the weigh-ins, held 4-9:15 p.m. daily, has grown immensely since the tournament’s inception, according to Jim Motsko, founder of the White Marlin Open, as several thousand visitors pack into the area surrounding the bayside marina’s docks to get a front-row view of the fish as they are brought to the scale.

Motsko suggests spectators arrive early to get a clear view of the action at the scale. Some people show up hours before to stake their place in front of the scale, while the rest of the diehard fish enthusiasts are there by 4 p.m., when the weigh-ins begin.

“The people in the crowd think it’s exciting and so do the anglers themselves,” Motsko said.

If the weather is ideal, Motsko expects a large number of boats to go out fishing on Day 1.

There is no cost to attend the weigh-ins, but visitors are reminded parking is prohibited at Harbour Island. Parking is available on side streets, or for a small donation, in the Presbyterian Church lot on 14th Street. There will also be an express shuttle service offered from the Ocean City convention center on 40th Street to the corner of 14th Street and Jacqueline Avenue. Express service will operate about every 20 minutes from 3-11 p.m. daily during the event. Parking is free at the convention center. Spectators may take the Ocean City bus to the scale as well. Both the shuttle and bus cost $3 for a ride-all-day pass, or $1 per boarding.

Motsko estimates that between 4,000 and 5,000 people come and go from the Harbour Island dock area each day to watch the weigh-ins, but the excitement begins even before anglers put their lines in the water.

Hundreds of spectators wake up early, especially on Day 1, to catch the fleet of boats leaving each morning from the Ocean City inlet. Watching the boats depart for the fishing spots has become increasingly popular, as people line up along the jetty bright and early just to catch a glimpse. Boats may leave as early as 4 a.m. this year.

“It’s become an event in its own,” Motsko said.

Another spot to see the vessels head out for the day is downtown at Sunset Park on South Division Street or the bayside boardwalk near Third Street.

Live streaming video of the weigh-ins will be available online again this year at www.whitemarlinopen.com. Daily activity and updates will also be posted.