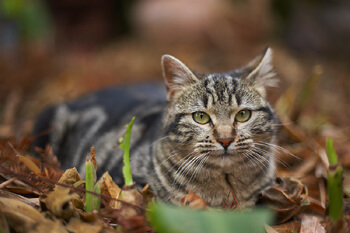 (Nov. 29, 2013) Susan Coleman starts most days at 6 a.m., doing rounds at six sites in and around Ocean City. By mid-morning, she’s answering phone calls, and then is back out in the field.

Each Thursday, Coleman loads her truck with around 25 traps and makes the trek to and from Cambridge, all part of an unpaid social service to the city’s feral felines.

“It’s what I love doing,” said Coleman, who spearheads Community Cats Coalition, a group of volunteers that helps manage the area’s free roaming cats through a trap-neuter-return (TNR) program.

Coleman moved here in 2009 and said Community Cats, working with Delmarva Cat Connection and Town Cats, has helped spay and neuter more than 2,500 of the area’s fecund felines since. The program is yielding results in some cat colonies, she said.

TNR helps control the colonies by stemming reproduction and leading to attrition. The procedure costs just $45 per leonine head at Snip Tuck Inc., an all-volunteer, nonprofit group dedicated to reducing the number of unwanted animals on the Delmarva Peninsula.

Compared to the average $150-250 price tag to get a cat fixed, the costs are low, thanks to the “assembly line” procedure at the clinic, Community Cats Coalition’s Carlene Morrison said.

“They go from one station to the next,” she said, from the room where the cats get an injection that knocks them out to an ear-cleaning and nail-clipping station, pre-surgery shaving, operation and recovery.

The procedure comes complete with a rabies vaccination, penicillin to fight off any infections and a full health exam, Morrison said.

But TNR is contentious in Worcester County, where the city council and county health department split in their responses to a request this year for funding for the program.

“Trap, neuter and release is primarily speaking to the reproductive status of the cats,” said Dr. Andrea Mathias, Deputy Health Officer and Medical Director for the Worcester County Health Department. “Reproductive health is not the only health aspect of any animal. There’s a lot of other health-related care that goes into taking care of a cat.”

The big concern is rabies in Worcester County, Mathias said.

Though all trapped cats get a rabies vaccination in the TNR package, re-trapping them for their one-year booster proves problematic since they roam free. The very nature of the stray colonies “places cats in situations where they are likely to be exposed to the wild, rabid animals that we know are in our… community,” Mathias said.

That can cause serious problems when people, accustomed to recognizing cats as pets, and household pets come in contact with infected animals.

However, none of the county’s 44 confirmed cases of rabies this year were caused by cats, nor were the 37 suspected, untested cases, according to the Worcester County Health Department’s website.

“It always comes back to a rabies issue,” Coleman said.

In response to the need for booster shots, “we try,” she said.

Re-trapping every cat for a rabies vaccine is farfetched in the free-roaming, feral population. But because the cats are wild, they are less likely to let humans pet them, and the alternative is much worse in Coleman’s eyes.

Likewise, around 70 percent of the cats that make it to shelters are euthanized before they’re adopted out, Morrison said.

To help save lives, Coleman hopes to gain the city council’s endorsement to start a marketing campaign about TNR in Ocean City.

“It’s really just a matter of educating, letting people know I’m here,” she said. “The more people I can reach, the better for the cats.”

The council agreed to give grants of $1,500 and $2,500, respectively, to Delmarva Cat Connection and Town Cats earlier this month, which Coleman said will help fund local TNR programs, where resources are “few and far between.”

However, the Worcester County Commissioners, who are advised by the county health department’s health officer, will not financially endorse the TNR program unless there is some record that cats are being updated on their rabies vaccinations.

“It’s a laudable effort to try to take care of the reproductive health of the cats, but it’s just not been sufficient to address all the other health issues of the cats and how that affects people,” Mathias said.

Still, Coleman is trying to get a TNR ordinance in place in Worcester County.

“It’s going to take months, but at least we’re going to get started,” said she. “It’s worth so much more than saying we don’t want them here at all.”

Coleman is always looking for volunteers for jobs from feeding and fundraising to driving the cats to Cambridge to be fixed. Reach her at 443-909-8047 or catrescue1@gmail.com to sign up or for more information. To learn more about Community Cats Coalition visit www.communitycatscoalition.com.