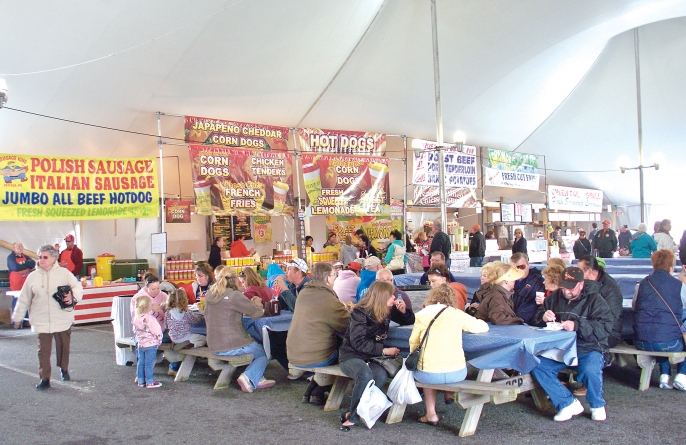 (May 10, 2013) Organizers attribute windy conditions and cool temperatures to a decline in turnout for the 2013 Springfest celebration, last weekend at the inlet parking lot.

“The temperature was seasonably colder and we had high winds all four days,” said Tom Shuster, director of the Ocean City Recreation and Parks Department.

The temperature was in the low 50s during the day and much colder once the sun went down.

The four-day festival, which traditionally kicks off the start of the resort’s summer season, drew 97,021 visitors to the inlet parking lot to hear live music, shop for arts and crafts and sample an array of food.

That was approximately an 8 percent drop from last year, when 106,321 guests attended. The temperature, in the middle to upper 60s, was much milder for the 2012 festival, Shuster said.

An estimated 11,537 people came to the festival on opening day last Thursday, while 23,133 visited on Friday. On Saturday, approximately 45,971 people stopped by the Springfest grounds. On the final day of the festival, last Sunday, 16,380 came through the gate.

Approximately 180 artisans, in addition to commercial vendors, were on hand selling various merchandise.

“Springfest was great. I had a wonderful show and was pleased about how many of my regular customers were at the festival,” said New Jersey resident Gail Paolino. “Customers were cold, but all were having a good time.”

Paolino has been hand-painting clothing since 1982. She has participated in Springfest since 1992. Each of her “Daffydills” garments are painted one at a time and feature fish, palm trees, shells, lighthouses, sandpipers, starfish, seahorses, flip-flops, and other designs.

“Springfest actually was our second best show sales-wise, ever, and that is saying something since we have been doing art/craft show for over 30 years,” she said.

“Everything that was controllable – except the weather, of course –indicated a very well run show and showed us why this festival is a top rated affair year after year on a national basis.”

Another major attraction was the food. More than two dozen food vendors served up a variety of dishes.

Organizers were pleased with the entertainment, especially headline acts.

“I can’t remember when we had two sellouts back-to-back. We’re really pleased with that,” Shuster said. “Crowds loved both groups.”

Country star Justin Moore took the stage on Friday and played in front of 1,786 fans. Tickets sold out for the concert earlier in the week.

Foreigner entertained a packed house of 1,790 fans on Saturday. Tickets sold out more than two weeks in advance.

“That was a hot ticket,” Shuster said.

Beatlemania Again kicked off the headline entertainment on Thursday. A total of 1,483 saw the show.

Springfest has been rated the No. 5 Classic and Contemporary Arts and Crafts Show in the country by Sunshine Artist, “America’s Premiere Show and Festival Magazine.”