(Dec. 7, 2012) All 10 Lady Mallards on the Worcester Prep girls’ basketball team are talented ball players, which is one of the reasons why the team is 3-0.

“I think our biggest asset is that we have so much depth off our bench,” said Worcester Coach Page Watts Rogers. “We can sub almost everybody and you can’t even tell a difference.”

Last Friday, the Greenwood Flames traveled to Berlin to battle the Mallards. The home team was ready from the opening whistle and by the end of the first quarter, the Mallards led 17-3. Worcester netted six points in the second quarter and held Greenwood scoreless to gain a 23-3 advantage heading into the halftime break.

“I think we came out in the beginning of the game with a bang. We were on fire,” Rogers said. “Our fast breaks to start off were great. Our rebounding, our lay-ups, everything in the first four minutes of the game went perfectly. Then I saw the game slipping away really fast, so we kind of pulled the breaks back and went into a zone [defense] and away from our man-to-man. We kind of strayed from our game plan a little bit.”

By the end of the third quarter, the Prep squad had pulled ahead 30-9. Worcester went on an 11-0 run in the final quarter before Greenwood scored with about 20 seconds remaining in the contest. Senior co-captain Molly Marshall tallied the final basket for the Mallards in their 43-11 victory.

“The girls are playing with so much confidence,” Rogers said. “Everybody’s been working really hard in practice, and our defense has been phenomenal.”

On Monday, Worcester competed on the road against the Chincoteague Ponies. The visiting Mallards took control early and led 18-4 after the first quarter.

“Our starting line-up just crushed them. We were fast breaking, we were full-court pressing them and stealing the ball. They couldn’t get the ball past half court,” Rogers said.

Worcester outscored its opponent 12-6 in the second quarter to go into the halftime break on top 30-10.

The Prep team tacked 14 points on to its total in the third quarter and held Chincoteague scoreless. The Mallards won the game 48-20.

“They played awesome. We made all our lay-ups and that was one of our goals,” Rogers said. “Our goals were to make the easy lay-ups and to talk a lot on defense and get some rebounds.”

“Everyone’s playing so well. There’s such a good spirit and everyone’s so positive. It’s just so much fun,” Rogers said. “They’re really confident in themselves, which is the difference from any other year.”

The Salisbury Christian Jaguars are scheduled to visit Berlin today, Friday, for a 4 p.m. match. Rogers said the game will be a true test for the Mallards.

“They would crush us in the past, by like 20-plus points, but they graduated three of their best players who scored most of their points‚” Rogers said. “We were such a young team and now we’re finally older and able to compete.” 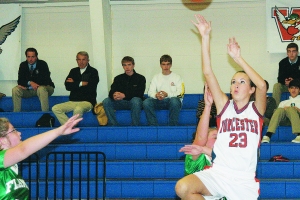 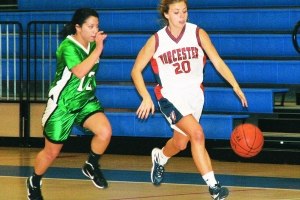