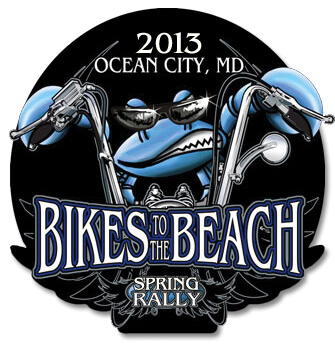 (April 26, 2013) An assortment of activities for motorcycle enthusiasts are on tap for this weekend at locations in and around Ocean City as part of the third annual Bikes to the Beach Spring Rally.

During the past several years, both Hooper’s Crab House in West Ocean City and Oasis Bar and Grill in Whaleyville have played a significant part in fall motorcycle events held throughout the area. To draw motorcycle enthusiasts and other visitors to the resort during a slow weekend in the spring, the two businesses joined forces in 2011 to create the inaugural Bikes to the Beach Rally.

Similar to the larger bike week held every fall, Bikes to the Beach — the brainchild of Hooper’s General Manager Ryan Intrieri, Manager Patrick Brady and Oasis owner Bobby Riccio — was the first organized springtime motorcycle event to take place in the area.

“We created the spring event with the sole purpose to bring business to the area, not just to benefit Hooper’s and Oasis. We wanted to help out local businesses and hotels, as well,” Intrieri said. “We want everyone to benefit from this. Anything that can bring people to town can only help.”

The 2011 spring rally, which included live entertainment, contests and vendors at both locations and organized countywide rides, drew thousands to each host location — Hooper’s and Oasis.

Despite cold and rainy weather, the 2012 event drew an even larger crowd than the year before.

“Considering the weather Friday and Saturday, we were still up from the first year,” Intrieri said. “This year, pre-registration has almost tripled from last year and we’re really excited about that. We’re expecting the third annual event to be even bigger.”

day and will continue through Sunday, will include musical entertainment, food, vendors, bike rides and contests at the two host locations as well as at the two-dozen or so bars and restaurants sponsoring the rally.

Jack Daniel’s and Fish Tales on 22nd Street are the main event sponsors.

Rally participants may register at Hooper’s Crab House, located at the foot of the Route 50 bridge this weekend for $20 and receive one chance to enter into the big drawing, where two people will win the grand prize of an all-expense paid trip to Ocean City for the annual fall rally. The grand prize includes a three-night hotel stay, food and beverage gift certificates and $250 spending cash.

Also, visit participating sponsor locations, and for every $10 spent, take the receipt to Oasis Bar and Grill by noon on Sunday for a chance to win the prizes. For example, if the receipt is for $50, then the purchaser will receive five chances to win.

The official Harley-Davidson Drill Team will be at Hooper’s today and Saturday.

Registration for the Custom Bike Show will take place from 10 a.m. to noon on Saturday. Cost is $10. Proceeds to benefit local charities. Judges will view the bikes from 1-3 p.m. and trophies will be presented at 4 p.m. The bike voted Best in Show will appear on June cover of Thunder Roads Magazine MD-DE-DC.

The Ocean City American Legion Post #166 will host its second annual poker run on Saturday. Register at 10:30 a.m. at Hooper’s. The cost is $15 per rider, $10 per passenger. The run will begin at 11:30 a.m. Cash prizes, trophies and door prizes will be awarded.

Thunder Roads Magazine will present its “Girls of Thunder” contest at 7 p.m. on Saturday at Oasis. Contestants must be 21 or older. Registration is free and available at Hooper’s or Oasis. Ladies will be judged in four areas: biker attire, swimsuit, personality and crowd reaction. The winner will be featured on the magazine’s June edition cover.

For more information about the rally and to view activities, visit www.oceancitybikestothebeach.com.