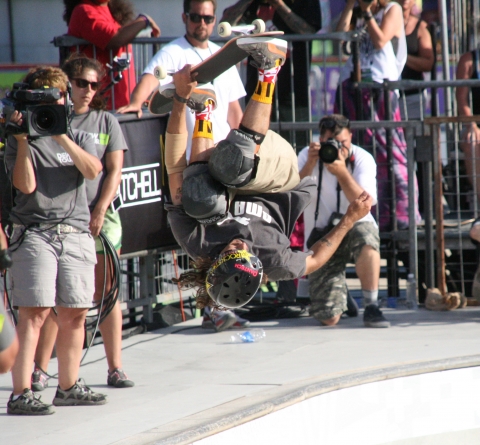 (June 27, 2014) After months of anticipation, the wait is finally over as the Dew Tour Beach Championships has returned to Ocean City.

Last week, workers began constructing a skateboard bowl, vertical ramp and a BMX park, along with the rest of the venue that will contain the “Dew Tour Experience” booths, activities and concert stage on the beach, adjacent to the Boardwalk, just north of the pier in downtown Ocean City.

“To see how they erect a stadium like that in such a short amount of time is incredible,” Ocean City Mayor Rick Meehan said last week.

Working day and night, the crews completed the blocks-wide “Dew Tour Experience” earlier this week — just in time for athletes to get in some practice sessions, which were slated for Wednesday. Competitions were scheduled to kick off Thursday, June 26, and will continue through Sunday.

“When we set out to find a ‘beach’ locale for the Dew Tour, everything came together in Ocean City. The relationships we have with the mayor’s office, city council and all the city departments help bring to life what has become our biggest single event to date, with record attendance,” said Eric Grilly, president of Alli Sports, a division of the NBC Sports Group. Alli Sports is a media, event and branded content company that specializes in action, adventure and adrenaline based sports. “We also love fitting into the overall cultural landscape of Ocean City, utilizing the natural environment to incorporate events like surf, skateboard bowl and the skate shop battle: city vs. city, which draws competitors from across the region, into the competition.”

This is the fourth year the Dew Tour will host competitions in the resort.

During its Ocean City debut in 2011, the Pantech Open set a Dew Tour attendance record by drawing approximately 73,000 fans during its four-day run in the resort, July 21-24–its first beachfront venue. That record was broken in 2012 as an estimated 93,000 spectators came out to the beach for the Dew Tour Pantech Beach Championships, Aug. 16-19.

The Dew Tour, with its world-class athletes, returned to Ocean City for the third year in 2013, and again, a new attendance record was set. Over the course of five days, June 19-23, an estimated 103,000 fans attended the Dew Tour Beach Championships. It was the first time the Dew Tour hosted more than 100,000 attendees at a single event.

“We are thrilled to welcome the Dew Tour back in Ocean City for their inaugural 10th anniversary event,” said Jessica Waters, Ocean City’s communications manager. “Last year, the Beach Championships in Ocean City brought record-breaking crowds and I believe there is no better place for extreme sports fans to celebrate the last decade of the Dew Tour than the beautiful beach and Boardwalk in Ocean City.”

When asked if he was looking forward to bringing the Dew Tour back to Ocean City, Grilly said “absolutely.”

“[This year] marks the 10th anniversary of the Dew Tour, so it’s a very exciting year overall for us, and we love the thought of kicking it off in Ocean City…After the success of our first three events in Ocean City, it was a natural decision for us to return for 2014,” he said. “Last year in Ocean City we saw our highest attended event in Dew Tour history with more than 103,000 people and [we] are hoping to sustain the excitement coming into 2014.”

“This is the first year we’ve updated our concrete bowl, so fans have the chance to experience the first time the athletes ride the new set-up and create their new runs,” Grilly said. “With the best names in the sports confirmed for the Dew Tour, crowd favorites like vert and BMX park are sure to astound once again…”

In addition to the competitions, the Dew Tour will feature free live concerts on the beach starting tonight, Friday, with Cage the Elephant, a rock brand from Bowling Green, Ky. best known for its singles “Shake Me Down” and  “Ain’t No Rest for the Wicked.” Opening for Cage the Elephant will be SKATERS. DJ-producer GRiZ will headline Saturday’s concert on the beach, with opening act heRobust.

“For five days, we’re taking over the beach just north of the pier. The Dew Tour is a great family-friendly event, with free general admission, and plenty to experience – you get the chance to watch inspiring athletes compete at the top level of their sport, and in our Dew Tour Experience, you also have the opportunity to meet them and get autographs, as well as play games, win great prizes and interact with our partner brands,” Grilly said. “Add in our evening events – a surf competition, and live concerts Friday and Saturday – and you can find something for everyone at the Beach Championships.”

Waters said she is “extremely excited” about the Dew Tour returning to Ocean City.

“I have never participated in extreme sports myself, but I must admit, something about the energy of watching the BMX and skateboarding athletes compete that instantly makes you a fan of the sport,” she said. “Not to mention, watching the exciting competitions unfold with a backdrop like the Ocean City beach and Boardwalk makes the thrill of the event even more exciting.”

With two small children and a young nephew, who skateboards, Waters said she plans on attending many competitions.

“The Dew Tour is really a family event and not only do the kids enjoy the excitement but the parents get really into the event as well,” she said. “There is an energy about the Dew Tour beach competitions that is hard to explain unless you have experienced it before…it’s invigorating, exciting and always a memorable event for our residents and visitors.”

Susan Jones, executive director of the Ocean City Hotel-Motel-Restaurant Association, is also looking forward to the return of the Dew Tour.

“Having two teenage daughters, I’m sure we will make it down to see the action,” she said last week.

“I enjoy going. They’re world-class athletes and it’s amazing what they can do,” he said.