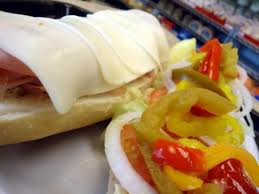 (In the Resort Plaza)

Sam DeVito opened the first pizzeria/Italian restaurant in Washington, DC in 1934 and the family ran restaurants there until 1981 when his son, Mike DeVito, left the DC area to open a pizza/sub shop/deli in Ocean City, Md.  Now Mike, realizing that he needed an education in a brand new kind of undertaking, apprenticed in New York and New Jersey where he felt they; at the time, had the best Italian deli/sub shops.  During this time Mike made contacts and learned the ins and outs of the deli business. When he felt ready, Mike brought the family to the Eastern Shore and set up shop on 143rd Street in the Resort Plaza.  At that time there were only a couple of beach cottages around him and the Sun and Surf Movie Theatre which, back then, only had two screens.  That was 32 years ago and we are all the better, and the heavier, for this great Italian deli being in our town.

DeVito’s is a small storefront with just a counter and deli display in the front along with a couple of soda refrigerators and plenty of articles on the walls celebrating Mike’s dad and mentor, Sam.  There is no seating and no beer or wine is sold.  The menu is Subs (hot and cold) and Pizzas with a couple of salads thrown in to make you feel good about yourself. Mike is there pretty much all the time taking your order and controlling his product; and believe me, it is one hell of a product!

Now, you are probably asking yourself, “With all the sub shops in Ocean City why the hell would I need to drag myself all the way to 143rd Street just for something I could probably get next door to my hotel or condo?”  I understand your question and believe me I have gone to a number of other shops for a sub and been perfectly content.  That is until I dragged myself to DeVito’s, now I can’t eat another sub or pizza without comparing them and wishing I was eating the original product.  The reason is beautiful in its simplicity but complex in its execution.  DeVito’s is the only place in town that bakes its own sub rolls daily.  Now I don’t mean putting a packaged par-bake roll in the oven and calling it fresh baked.  I mean making the dough from scratch every day, letting it rise and baking it in hot pizza ovens.  The rolls are a revelation; they are toothsome and crusty with a lovely yeasty quality that augments the meats used in your sub.  This makes all the difference in the world because as Mike says, “Anyone can buy the meats I use, the difference has to be in the bread” and I might also add in the balance between meat and bread.  DeVito’s subs are a perfect marriage of meat, bread and toppings.  They are NOT over-stuffed behemoths that you can barely get your mouth around; they are, as I have stated, perfectly balanced.

Now, the same attention to detail placed on the subs is not lost on the pizzas.  DeVito’s pizza crust is made daily, as in most good pizzerias, but this crust has a unique chewiness that when combined with its yeasty aroma and the heat of a well seasoned oven becomes the perfect vehicle for any combination of toppings your heart desires.  All the sauces are home-made, zesty and well seasoned.  The only downside I have is that by the time I get my pizza home it is cold but you can just pop it in the oven and warm it up so no big thing.

Ok, let me be clear here, I am not saying that DeVito’s is the best pizza in the world.  Everyone has their own hometown pie that they dream about.  I have also had a couple of better sandwiches in my time but I really can’t remember where or when off the top of my head.  I am saying that Devito’s is easily one of the top two Italian deli, pizza and sub shops on the Eastern Shore and you would be doing yourself a disservice if you missed out during you next visit to the Ocean City area.  The simple fact is that DeVito’s has been around in one form another since 1934 making people happy with their food so they must be doing it right.  Make the effort and give yourself and your family a treat with a sub or pizza they will not soon forget.

The Hardcore Foodie has been in and around the restaurant business for over 40 years. Starting out as a busboy during his teen years he attended Johnson and Wales and graduated with a degree in Hospitality/Hotel/Restaurant Management. Following graduation he worked for Sheraton, Hilton and Marriott properties on the east coast. Later in his career he managed well known, high end, freestanding Italian and French restaurants in Washington DC, Atlanta Ga., Scottsdale Az. and San Diego Ca. Upon returning to DC he worked for Marriott Food Services as GM of both the House of Representatives and Senate Capitol Building operations for 5 years. The Hardcore Foodie has lived in Ocean City, Md. for 12 years but still keeps active in the food industry through consulting, writing and constant research.